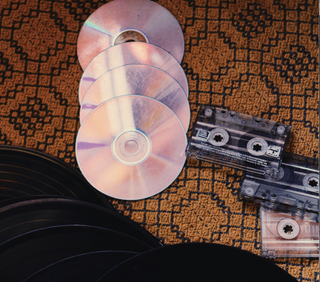 British music-lovers bought or streamed the equivalent of more than 150m albums last year as UK music consumption hit its highest level since 2006.

British fans purchased or streamed the equivalent of 154m albums by end-of-play 2019 across all formats – including CDs, vinyl and cassettes as well as digital downloads and subscription service streams – the most since music sales hit the equivalent of 161.4m albums back in 2006.

Lewis Capaldi was the most streamed artist of the year, with his album Divinely Uninspired to a Hellish Extent and the single Someone You Loved topping the charts. (For nostalgia purposes, the bestselling album in 2006 was Snow Patrol’s Eyes Open, and Gnarls Barkley’s Crazy was the top-selling single. Yes, that was 2006.)

The BPI's annual report highlights the extent to which the rise of legal streaming services such as Tidal, Qobuz, Spotify, Deezer, Apple to Amazon continued to be the musician's saviour: the equivalent of 114m albums of music were streamed this year, up by a quarter compared with figures from 2018.

To clarify those album sales figures, every 1,000 tracks streamed is considered to be the equivalent of one real-world album sale. UK music fans listened to a record 114bn tracks on streaming services in 2019.

The digital revolution has not obliterated traditional music listening altogether though – far from it. Vinyl sales hit 4.3m in 2019, the 12th consecutive year of growth. Indeed, the popularity of the once near-extinct record reached levels not seen since the 1980s, with Liam Gallagher’s Why Me? Why Not becoming the most successful vinyl album of the year.

The physical music revival also extended to the humble cassette. Yes, sales remained relatively small at 80,400 but (thanks in part to the 40th anniversary of the Walkman and a fresh crop of Bluetooth-integrated cassette players) they almost doubled year-on-year, enjoying their biggest year of sales since 2004.

Cassette sales have grown in each of the past seven years, with notable releases including Robbie Williams’ The Christmas Present, which became the fastest-selling cassette album since Now 52 in July 2002. (Yes, we feel old too.)