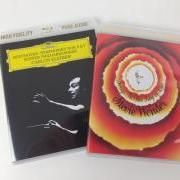 Compatibility with any existing Blu-ray player or PS3 obviously gives HFPA an advantage over previous high-definition standards such as SACD. In addition, most discs will include the option to download the same content as either MP3 or FLAC lossless files - this allows the music to be enjoyed across virtually all platforms and players.

Universal Music Group is at the forefront of this initiative, but with support from the likes of Warner Music Group, Bose, Bang & Olufsen, Dolby, DTS and more it's obvious the format has some heavyweight backing.

A number of titles have already been released in France, the sound quality of which have been very positively received. The rollout into other territories will continue throughout 2013 (currently the UK launch is slated for September). Information on UK pricing is tentative, but French retailer FNAC is charging just shy of €20 per disc.

According to research undertaken by Universal's Insight Team last year, the proprtion of music consumers who said they were fairly/very/extremely likely to buy a high-definition audio product within the following six months ranged from 21% (UK) to 32% (US).