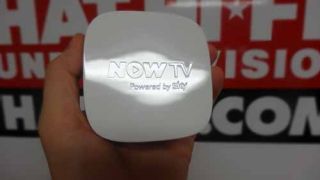 The Now TV Box is a £9.99 device that converts any TV in to a Smart TV, thanks to the addition of BBC iPlayer, Sky Movies, Sky Sports, Spotify and other on-demand streaming services.

While much of the enticing content costs extra, the cheap up-front price and addition of free services such as iPlayer, are sure to tempt plenty of people to take the plunge. We've got hold of a Now TV Box, so here's a look at what you get and our first impressions.

First things first, Sky has confirmed to us that the Now TV Box is a "white labelled Roku box with customised Now TV interface", a result of a Sky/Roku partnership, so it may look familiar.

What do you get with Now TV? The main draw is pay-as-you-go Sky Sports, yours in 24-hour bundles for £9.99. Also available is Sky Movies content on a pay monthly basis, starting at £8.99.

You can also get Now TV on LG Smart TVs, Roku boxes, Xbox 360, PS3, Android devices, iPad, iPhone and YouView. Though content offerings differ. But about this £10 Now TV Box...

The box itself is very dinky (84 x 84 x 24mm are the dimensions, and it weighs just 85g). The size of a beer mat was the comparison made in the press release, and it's certainly palm-sized and easy to accommodate into any system set-up. It feels light and fairly insignificant but ultimately once it's connected build isn't much of an issue.

A small LED power light is the only interruption to the design on the front, while "Now TV, powered by Sky" (for that's how the service is constantly referred – it's very much a separate brand) is embossed on the top.

Round the back you'll find an HDMI ouput, minijack AV out for analogue audio and video and a power connection. It's Wi-Fi only so no Ethernet input – we prefer a wired connection for more robust performance so that's a bit of a shame.

The Now TV Box outputs at a maximum resolution of 720p via HDMI and also promises to deliver "5.1 surround sound where available", though there's no mention of Dolby Digital anywhere. We've asked for clarification. An HDMI cable is supplied alongside a smart white remote control.

Getting started is easy. Power-up the box and it will sniff out any wireless networks, finding a whole host of networks in our office. Get connected any you're in business.

To access the Now TV you will have to sign-up to the service online on the Now TV website and create a Now TV account. This requires a login and password and entering card details but for now you can opt for the free Sky Movies pass so it needn't cost you anything extra (yet).

You can register up to 4 devices on your Now TV account, watch on 2 devices at the same time and can make 1 change per calendar month to your registered devices

In our box was a free Sky Sports Day Pass, so that's the option we chose. Having gone online and registered, you can login to the Now TV Box on your TV.

So what do you get? You interface is a simple row of app tiles which you can scroll through. The Settings tile is the place to check you're getting 720p and surround sound (again, we're checking the details on what the box offers). Next is the Roku Channel Store, which is where you find all of the apps.

Any new apps you find simply click to install and then they will be pinned to this home screen. Within the Roku Channel Store, My Channels shows the apps you already have, followed by a New and a Most Popular row before the apps are broken down by types of content: Film & TV, Music, Internet TV etc.

The selection is pretty thorough, with BBC iPlayer, BBC News, Sky News, Demand 5, Spotify, Tunein, Vimeo, Facebook, TED, Flixster and IGN some of the best at first glance. A little preview box gives you a brief description should you not be sure if 'Shalom Television Channel' is for you.

iPlayer and Spotify performed well from a quick look, with a familiar iPlayer Smart TV design and access to 'HD' content, while Spotify allows you to login (you need to be a premium subscriber) and then access playlists, see album artwork, search for tracks and more very neatly.

What you won't find, we're fairly confident, is Lovefilm or Netflix. If you want movies, then of course the 'powered by Sky' element comes in to play and Sky Movies is your source.

Now TV is the next tile on the home screen after the Roku Store, and is where you find the juicy stuff: Sky Movies and Sky Sports. The 'catch' is of course that this is premium content.

Expensive? It seems up for debate. We think if you'll be dipping in and out, once a month at most, and/or getting mates round who might share the cost, then for a day of potentially quite a lot of content, it's not too bad. It's certainly cheaper and easier than having a Sky dish and a monthly subscription.

Sky Movies meanwhile is accessed on a pay-monthly basis. It's £8.99 for your first 3 months, then £15. You can get a 30 day free trial for now. Access to over 700 movies, the same as those offered on Sky Movies' on-demand service on Sky boxes. You can cancel these subscriptions at any time, according to the Now TV T&Cs.

We've had a few hours of playing around with the Now TV Box, and we like what we see. We've not compared the performance to any other streaming products – we'll do that in a full review – but first impressions are promising.

It's easy to use and shows little sign of flakiness in our use so far (there was the odd long pause but no crashes or need to reset). The custom interface is very smart, fast and slick to move around and intuitive in terms of finding relevant apps and content. The remote (and box) look and feel part of an affordable piece of kit, but then that's what we're dealing with here.

And the selection of content is good: £10 for a box that adds iPlayer, Demand 5 and internet radio apps is a bit of a bargain on its own – pay for premium content such as Spotify and of course Sky's Sports and Movies, and it could offer a lot.

Picture performance looks solid. Full HD would be nice but pictures seem decent at first glance, with only occasional syncing/buffering issues, which show the importance of a good wireless network connection.

Sky recommends "at least 2.5 Mbps". We politely recommend an Ethernet port perhaps in another model. Either way, you need a decent network to enjoy any streaming product or service.

First impressions are definitely good for this compact, incredibly affordable Now TV streaming box. For free catch-up TV services it seems a no brainer; for premium Sky Sports and Movies – which is what Sky is really after – it will ultimately depend a great deal on how much you're prepared to pay for premium content.

We'll be giving this some thought, and going in to more detail in terms of compartaive picture, sound and usability performance (over a longer period of time) in a full review.