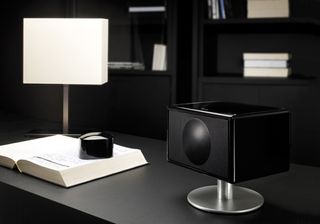 Geneva has announced the release of the Model S Wireless DAB+, a new all-in-one system that adds wireless Bluetooth streaming to the Geneva desktop sound system.

The Model S Wireless DAB+ has an FM/DAB/DAB+ tuner with room for six presets, a stereo minijack input, a digital alarm clock and a distinctive red LED display.

Geneva's design is equally distinctive, simple and on the minimal side but some how bringing a little flair and style to a standard speaker box shape.

The new Model S Wireless contains Geneva's own "patented technology for stereo imaging performance", which the Swiss manufacturer claims will deliver an "exceptionally wide frequency range". As big fans of the Geneva Sound Model S DAB, we won't be knocking the claims until we've heard the speaker.

Designed for ease of use, the A2DP Bluetooth connection will work with any Bluetooth-enabled smartphones, tablets or laptops.

Available in a choice of white, black and red, the Geneva Model S Wireless DAB+ is due on sale this month at a price of £329. See Geneva Lab for stockists.