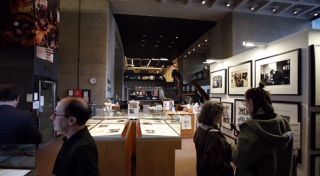 A photography exhibition documenting life at Abbey Road Studios through the ages is now open in London.

'Inside Abbey Road Studios' is a collaboration with rock photographer Jill Furmanovsky, who has snapped musicians at the studios since the 1970s. She was named Abbey Road’s Artist in Residence last year.

Furmanovsky worked with Pink Floyd during their 1975 Wish You Were Here recording sessions, but her more recent works feature the likes of Nile Rodgers, Royal Blood and Mura Masa.

The exhibition features various prints and photographs from 1975 to 2018 - many never seen before. One of the highlights is the Floyd snaps, as well as artefacts from the studios, including microphones and the original EMI TG12345 mixing console.

Visitors can also experience a custom listening station, comprising kit from Audio Technica and Naim, who are sponsoring the exhibition. If you fancy auditioning Audio Technica’s AT-LP5 turntable and MSR7 headphones, and Naim’s Uniti system, this could be your chance.

The holy grail of vinyl: the art of half-speed mastering