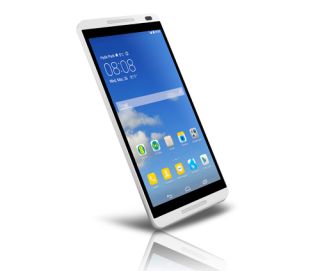 With ultra-slim, but ultra-powerful tablets in demand at the moment, it seems as if EE has made a grab for its own share of the UK market with the launch of the Eagle.

It seems they are targeting customers on the hunt for a bargain too, with this 8in 4G tablet described as the "UK's most affordable" – at a price of £199 on a pay-as-you-go basis.

There are also a number of contract options on offer from EE, with the Eagle setting you back £50 when you sign up to a 24-month, £15-a-month deal – the cheapest monthly option.

If the price isn't enough to tempt you away from rival devices such as Apple's iPad Mini or the Google Nexus 7, EE says the Eagle's tech specs will also grab your attention.

The Eagle's 8in IPS HD display offers wide-angle viewing and there's also front dual speakers for when you watch videos on the device, while a quad-core processor is also fitted.

Its 16GB internal memory can be expanded by a further 32GB by using a Micro SD card and is designed to ensure plenty of storage, should you want to keep your HD videos and music.

EE's Eagle also comes with a 5-megapixel rear-facing camera as well. While the "eagle-eyed" among you may already have noticed that the Eagle is not a rebadged Huawei MediaPad M1, it does look very similar.

The launch of the tablet comes as EE revealed 4G customer numbers have reached 3.6 million and sales of 4G plans has surpassed those of 3G plans for the first time ever.

As a result of the move towards 4G, EE has committed to expanding its network to nearly 2,600 small towns and villages. Only last month, it was confirmed that the north Wales seaside resort of Rhyl had become the 200th location in the UK to join EE's ever-growing 4G network – with more to follow.