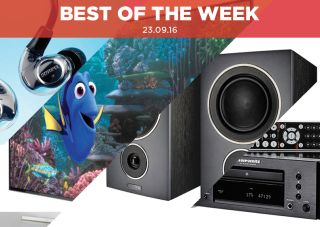 This week users uncovered a glitch with Apple's new Lighting headphones, vinyl is suffering a downturn in sales, whilst 4K TV is becoming ever more popular.

MORE: The best What Hi-Fi? deals of the month - September

Users have spotted a recurring glitch with Apple's Lightning EarPods on the iPhone 7. The volume control dongle stops working, affecting calls, volume and the use of Siri.

In order to (temporarily) fix it, the headphones need to be unplugged and put back in. A more long-term solution has been promised in a future update.

After a few years of rising sales, vinyl has encountered a bump in the road. Sales decreased by 9 per cent this year, according the Recording Industry of America (RIAA), resulting in sales of 8.4m records.

Is it just a blip or have sales of vinyl reached a plateau? Time will tell.

It appears there's a big appetite for 4K TV, with forecasts predicting that sales in the US alone will reach 20m next year.

So far 700,000 4K Blu-ray players have been sold, with the amount of 4K discs not too far behind, as more content is released in the format.

Are these headphones the purrfect gift for cat lovers?

Denon to add Alexa voice control to its HEOS range

Apple's Lightning EarPods and 3.5mm adapter do have DACs

The price has gone up, and though little has fundamentally changed, a series of small upgrades all add up to make a superior and confident CD player; surefooted in its sound, with good timing and a solid and reassuring build. Another superb effort.

Q Acoustics 3020 ruled the budget speaker roost, but it may have to abdicate its throne in light of Mission's LX-2. They communicate music in a fashion that gets right to the heart of the track, with no small amount of skill and enthusiasm.

Selling for less than expected, they're an an absolute bargain. Mission very much accomplished.

Shure's KSE1500 in-ears cost £2500 and are one of the finest headphones you can buy. They boast exceptional insight and balance, with a sound that's clean and clear. You'll need to use high-end hi-fi sources to get the best out of them (Spotify, not so much), but if you have the resources, you'll get a superlative performance.