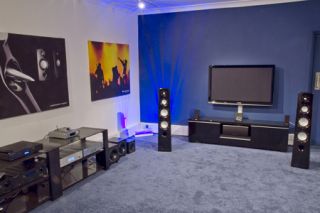 The recent news that Cambridge Audio is setting up a new technology hub in the city of its birth, Cambridge, will come as little surprise to those who’ve been watching the company closely of late.

Like many in the hi-fi business, it’s realised that music streaming is the future, and is busy developing a raft of new digital products following the launch of its NP30 network music player that we recently tested.

So the decision to strike a deal with Reciva, the digital technology company that helped Cambridge Audio create the UuVol digital music platform for the NP30 (and related apps), is an entirely logical one.

Cambridge has acquired the full rights to Reciva’s client source code, and three of Reciva’s development team have been transferred to the new technology hub.

They join Cambridge Audio's existing 30-strong research and development team, which already includes a core team of software and mobile app developers, most of them based at parent company Audio Partnership’s UK HQ near London Bridge.

I recently spent the afternoon there on a guided tour of the R&D facility (above), and was surprised to discover that Cambridge Audio now has almost as many software engineers as it does electronics and acoustics specialists.

But given the change in the way we increasingly access and play our music, be it from a hard drive, iPad, smartphone or some type of wireless streaming device, the company is clear it needs to further develop its expertise in that area.

“Underpinning this trend, we are now developing a range of digital music platforms which answer consumers’ needs, however they rip, store or stream their music collections.”

A case in point is UuVol (a twist on a translation of the word ‘cloud’ in Catalan, which is Nuvol, apparently), Cambridge’s own internet portal and control apps for iPad and iPhone. This can be used to control a number of devices, including the NP30 we’ve just tested. An Android version is in the pipeline.

The NP30 (above) gives a clear indication of the direction in which Cambridge Audio is now headed. At £400, it’s the most affordable network music player we’ve seen to date. And given that such devices are fast replacing CD players at the heart of many hi-fi systems, this can only help hasten that trend.

There’s no amplifier in the NP30, so you connect it to your audio system via a choice of analogue or digital outputs. It also connects to your home network (wired or wirelessly) and then on to any UPnP server such as a NAS drive or computer.

Once hooked up, it can play your networked music, USB music, internet music and streaming services such as Aupeo, BBC iPlayer Radio and MP3 tunes, effectively acting as a digital hub for your hi-fi system.

‘Digital hub’ is a phrase you’ll hear a lot at Cambridge Audio these days. Even the firm’s latest Blu-ray player, the £800 Azur 751BD, can stream media files over a home network and connect to the internet.

More audio streaming and DacMagic products are in development (I’m afraid I’m sworn to secrecy on those for now). What I can tell you is that the latest Cambridge Audio product to arrive in our listening rooms is the brand-new £150 iD100 digital iPad/iPod dock (below), which will be reviewed in our October issue, on sale August 24th (yes, I know!).

Initially developed for the original iPad, it had to be swiftly re-engineered when iPad2 appeared as Apple had made some software changes to the new model.

It takes a direct digital feed from your iPad or iPhone/iPod (it will work with any iPhone or iPod Classic but not some of the early generation iPods), bypasses the DACs in your iThing and feeds the signal via balanced, optical or coaxial outputs to an external DAC such as the DacMagic.

The aim is to improve the sound quality you get from your iPad/iPhone when using it as a music source in the home. You can even disable charging on the dock to further enhance sound quality (as Arcam does on its irDock). You’ll have to wait for the full review for our official verdict.

However, despite all this talk of digital hubs, Cambridge Audio is not turning its back on traditional hi-fi components, for which it is renowned. New upmarket hi-fi products are in development too (again, I’m afraid I’m sworn to secrecy).

In fact, with 70 per cent of Cambridge Audio’s sales now being overseas, there’s still a healthy appetite for UK-designed hi-fi in export markets, says Brown.

Also in the pipeline is the Cambridge Audio Azur 551R 7.1 multichannel receiver with 3D passthrough, due for launch in the UK in November/December and getting its first public showing at the Hong Kong AV Show this week.

The Hong Kong Show also marks the debut of Cambridge Audio’s next Blu-ray player, the Azur 651BD (below), which will sit beneath the 751BD. It’s expected on sale in the UK in time for Christmas. You'll find full technical details of both the 651BD and 551R in our news story.

One thing’s for sure, the R&D team at Audio Partnership is working flat out, and there’s a substantial range of exciting new products, both analogue and digital, hi-fi and home cinema, in the pipeline. We promise to keep you posted.