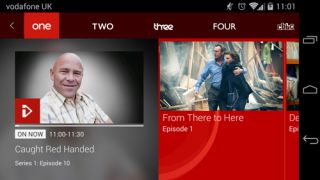 The BBC has released 'major updates' to its iPlayer app on Android and iOS, bringing a new look and design in an effort to make it easier to browse and discover content.

New 'Home', 'Category' and 'Channel' pages now have more of a focus on content curation, suggesting the most popular programmes on iPlayer.

There's a simple A-Z list of available programmes under each category, while the Channel tab will highlight shows specific to each BBC channel.

The 'Watch Live' button has also been made more prominent making it quicker to tune-in live via the original 'catch-up' app. Subtitles have also been added to downloadable programmes.

The BBC also promised future updates to the apps, with Live Rewind, continuous play, cross-platform playback and tailored recommendations all said to be in the pipeine.

The iPlayer update is free to download for mobile and tablet apps, and is also now available on Amazon Kindle and Windows Phone 8 devices. The iPlayer interface on Sky has also been redesigned.

iPlayer, which launched on the PC, is now available on more than 1200 devices, and March 2014 saw a record 320 million programme requests.

The BBC confirmed last month that the iPlayer catch-up window would be extended from 7 to 30 days this summer, while iPlayer Radio would get downloads this year, too.