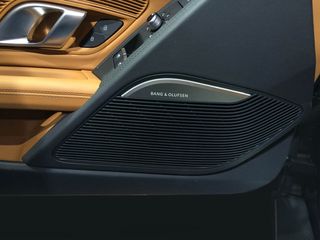 The B&O system comprises 13 active speakers, each with its own dedicated amplifier, and a subwoofer placed in the front wheel liner. B&O says the system's total output power is rated at 550 watts.

It's not the first time a B&O system has featured in the R8, and this latest B&O in-car system follows the launch of the 16-channel B&O system in the new BMW 6 Series last month and the Audi Q7 B&O 3D Advanced Sound System back in January.

The R8 system sports Class D amplification and use CosCone driver technology borrowed from the BeoLab 12 speakers. The Audi's CosCone drivers, a design patented by Denon and Marantz, aims to deliver the same performance as conventional drivers, despite being only half the height.

Various audio technologies, from Digital Signal Processing (DSP), to help feed the sound to all the speakers, and Vehicle Noise Compensation, to counter the noise of the engine, are also on board.

The B&O system also benefits from a surround sound algorithm, developed by the Fraunhofer Institute of Integrated Circuits (IIS), no less. Users will be able to use the MOST 150 infotainment interface to tweak the balance of the system, from "full surround sound" to focusing the sound towards the front of the car.

Jens Peter Zinck, senior vice president and head of automotive at Bang & Olufsen, said of the new system: “Working with Audi, Bang & Olufsen has proven that an outstanding surround sound experience can be created in limited cockpit environments. It is an exciting innovation and this show is the perfect place to unveil our efforts to the world”.

MORE: Read about the 2015 Audi R8 and the Geneva Motor Show on Autocar