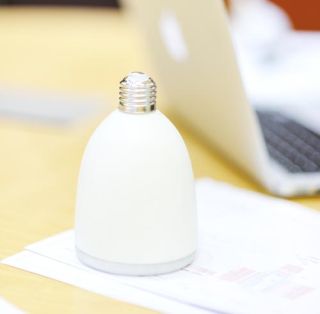 Avantconcept has taken to Kickstarter to launch a new crowdfunding campaign for AirBulb, which combines an energy efficient LED lightbulb with a Bluetooth wireless speaker.

The Hong Kong-based organisation is looking to secure $100,000 worth of pledges by 28th April to support the launch of the AirBulb manufacturing process later this year.

Avantconcept says the AirBulb will be compatible with a standard lamp socket (E26/E27) and will provide 3W of output power from a Class D Amp housed in the speaker element.

Once the unit has been installed, the dedicated AirBulb iOS and Android app can be used to play music or control your lighting. It will also be compatible with your light switch.

In addition, the group says you can pair two AirBulbs to your Bluetooth-enabled device. And if the Kickstarter campaign is a success, the product is due to be shipped from October.

AirBulb is expected to retail for $69 if funded, plus $10 for overseas postage to the UK. For more information or back the project yourself, head on over to AirBulb's Kickstarter page.