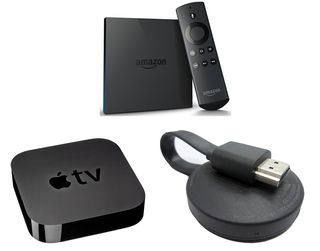 Prime Video isn’t available on Apple TV or Google Chromecast, so Amazon has taken the decision to ban the sale of the devices from its online store. An Amazon email to marketplace sellers said: "Over the last three years, Prime Video has become an important part of Prime. It’s important that the streaming media players we sell interact well with Prime Video in order to avoid customer confusion.”

Current listings for the devices will be removed by 29th October, but the online retail giant has said it will continue to sell other devices that do work with Prime Video, such as the Xbox One and PlayStation 4.

The Amazon Video app is available for iOS and Android devices, so these will still be sold as well. Roku devices don't seem to be affected either, even though despite supporting Prime Video in the US, the service isn't available on Roku devices in the UK.

Amazon’s own Fire TV streaming box will of course also be available to buy, including the recently announced 4K Fire TV box. Google has recently announced a new Chromecast streaming device and Apple unveiled a new TV box in September, although neither device is able to stream 4K content. Amazon currently offers in excess of 90 hours worth of 4K content through its Prime Video service.