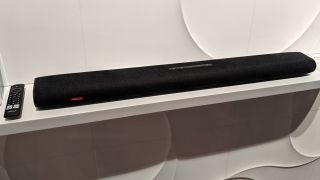 'But what's a Fire TV Edition soundbar?', we hear you ask. A Fire Edition TV soundbar is simply a soundbar with Amazon's Fire TV built in. So now you know.

So far, there are only two Amazon Fire TV Edition soundbars: the Anker Nebula (pictured) and Alto 8+ Soundbar - Fire TV Edition. But Amazon says it is working with more third-party manufacturers - including Polk Audio and Tonly - to bring more to market.

As well as getting Dolby Atmos support, which is designed to create a 3D soundfield without the need for loads of speakers, the Fire TV soundbars are also being improved with compatible device control (so you'll need one fewer remote control), HDMI switching and far-field voice control.

Building Fire TV into a soundbar makes all sorts of sense, but putting it into a car initially sounds like a bit of a stretch. Nevertheless, Amazon is extending its Fire TV Edition program on to four wheels with the help of BMW and Fiat Chrysler, who plan to launch Fire TV Edition cars in the near future. This will apparently allow passengers to watch content on the go and add Alexa voice control for the driver.

And, in all likelihood, this is just the beginning. Amazon is opening up its Fire TV Edition program, making it easier for manufacturers to embed Fire TV in their devices. So expect to see it in a lot more places very soon.

• Best soundbars 2020: the best TV speakers you can buy

• All our soundbar reviews