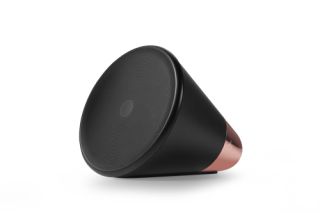 Aether – a new San-Fransisco based hardware and software company set up by former Nokia, Google and Apple employees – has launched the Cone wireless speaker as its first product.

The Aether Cone is, first and foremost, a music player that the company says will learn what you like to listen to, when, and where. A computer or mobile device is required for the initial setup, but after this, the Cone runs by itself.

It connects to your home wi-fi network and then to a streaming music service of choice, although details of which services are compatible haven't been announced yet. You'll also be able to send music via AirPlay.

The Cone has just one control – a dial. Turn it, and it will instantly play music it thinks you'll like, podcasts or Internet Radio. A turn to the right will go the next track, to the left will repeat the song you were listening to, and a complete turn will change the artist or genre entirely.

The Aether Cone features a 3-inch woofer and a dual tweeter design for stereo sound, a Class D amplifier and an ARM Cortex-A9 1GHz processor. It also has a built-in rechargeable battery, which claims to offer up to 8 hours of playback.

The Aether Cone will be available later in 2014 for $399. It will initially be available in a Black/Copper finish with a White and Silver model expected at a later date.