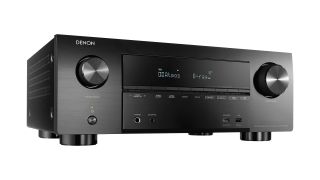 Denon continues to dominate the mid-range to high-end home cinema amplifier market, picking up another two What Hi-Fi? Awards in 2019.

The only new name on the list is the AVR-X3600H, which the company has described more as a trickle-down version of the receiver above it than an upgraded re-hash of last year’s £500-£1500 Award winner.

It gains extra channels, meaning you can now use it in a 7.2.2 system, or 7.2.4 by adding two channels of extra power, but also inherits many of the inner workings and premium parts of its larger sibling. The result is not only a better-featured amp, but a more powerful, confident performance that improves sonically across the board.

Above it is the AVC-X6500H, which remains our go-to AVR for budgets of £1500 and above. We often use it with our reference PMC Twenty5.23 speaker package – also an Award winner again this year – and it absolutely sings. Think the same full-bodied Denon sound, but with even more control over its serious muscle, and a dynamic range that draws you immediately into the film or TV show you’re watching.

Below £500 is another familiar name, the Sony STR-DN1080. This entry-level amp stopped us in our tracks when we first heard it a few years ago, and it hasn’t stopped picking up Awards since. If you aren’t fussed about feeding a whole army of speakers, this 7.2 receiver is about the most expressive and precise performer you could hope to find without spending twice the money.

It was named our Product of the Year at last year’s ceremony, but you’ll have to wait until 5th November to find out whether it retains its title. That’s when we hold our annual Awards event, and we’ll be reporting from there so you find out the winners at the same time as the industry folk in the room.

Until then, you can find the rest of our 2019 What Hi-Fi? Award winners here.

Six streamers walk off into the sunset with What Hi-Fi? Awards

Six desirable DACs make their mark at the What Hi-Fi? Awards 2019