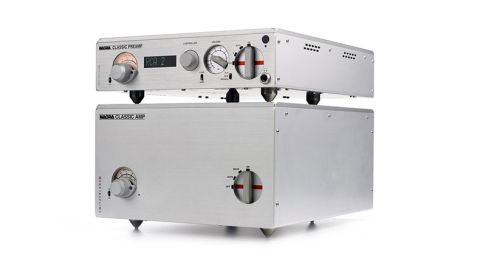 The company was founded in 1951 but waited until 1997 before launching its first domestic component.

That product, the legendary PL-P preamp, set sky-high standards for build quality and sound, and was styled to echo the appearance of the company’s famous recorders, right down to the prominent signal level meter. The PL-P set the aesthetic template that the company still follows today.

The Classic preamp is an ideal example. Put it next to the original and at a glance it’s hard to know which is the older design. But don’t assume that means the company has stood still – it hasn’t.

Look beyond the Classic’s general appearance with its trademark signal level meter, stylised volume control and compact casework, and it’s clear that things have evolved. The most obvious example of this is the front panel display, which shows the input chosen and helps in the overall set-up.

Things could be better though. The display leaves little room for information, and off-axis contrast levels aren’t great. Nagra needs to do better here.

Delve into the menus and you can change the input names, set the balance, switch from mono to stereo and check on valve life. It’s all done by combinations of turning and pressing the controller dial for varying degrees of time. The process takes a little getting used to, but soon becomes intuitive.

The large dial on the right of the preamp is more than just a power switch.

It also integrates mute and standby functions and, confusingly, has a separate setting for turning power on and off with the remote. Leaving it on the standard ‘On’ setting bypasses this function.

Few products we come across feel as well made as this pre (or the partnering Classic power amp for that matter).

Both are made with obsessive attention to detail, from the way the aluminium panels are machined and assembled right through to the neatness of the circuit layout and the quality of the parts used. These are eye-wateringly expensive products, but there’s no doubt they have the manufacturing quality to back it up.

The Classic is a valve powered line-level unit. If you have a record player, you’ll need an outboard phono stage.

Nagra makes a dedicated moving magnet/moving coil unit, but that will set you back a hefty £5900. Considering the pre/power combination we’re testing weighs in at over £25k, spending that much on a suitable phono stage doesn’t seem unreasonable – provided the record player is talented enough to justify such an outlay.

There are three valves in the preamp’s circuit – two ECC83s and one ECC81. Expect them to last at least 5000 hours, though the company says a life of up to double that isn’t unusual. The sound of valves gradually gets more distorted and noisier as they age, so there’s plenty of warning before they fail.

The engineers have been careful to use types of valves that are easy to obtain, rather than some more exotic designs that (potentially at least) may perform better but can’t be bought reliably or at sensible prices.

Even then, while both the ECC81 and ECC83 are about as common as valves get, things still aren’t easy. Despite sourcing from the best valve manufacturers, Nagra sets high standards, rejecting more than half the stock it receives.

Each Nagra product comes with a detailed test sheet, which shows the actual measurements of the product you have bought. The company takes great pride in the quality of its products and keeps copies of this information on file in case there are issues, or it requires repairs in future years.

The Classic Preamp has five line level inputs including a balanced XLR option. It also has a 6.3mm headphone socket on the front, and both balanced and single-ended outputs. While sparse by AV amp standards we can’t see this preamp getting caught short in a typical premium two-channel set-up.

We wish it had a smarter remote though. The plastic handset supplied is nicely shaped and simple to use, but lacks the quality feel we would expect at this price point.

We would imagine that the vast majority of these preamps will be partnered with a Nagra power amp, but the company has tried to keep things as flexible as possible by fitting a gain switch to accommodate alternative power amplifiers of differing input sensitivities.

The Classic power amp is relatively simple, as such units generally are. There’s a signal level meter again – it seems a Nagra product just wouldn’t be right without one – but beyond that there’s little of note apart from balanced XLR and single ended inputs and neat screw-down speaker terminals that work best with spades or bare wire connections.

There’s also the ability to adjust input sensitivity levels to make preamp matching easier, should you venture outside the obvious in-house choices.

Take a look inside and you’ll find that it uses tandem MOSFETs in the output stage that work in Class A over much of their power band. This gives the unit an output of 100W per channel into 8ohms.

Most similarly priced rivals will use more output transistors to get higher power outputs, but Nagra engineers prefer the purity of using just two and the reduced variability such a minimalist configuration brings.

If you need more power the Classic can be turned into a bridged monobloc at the flick of a switch. That takes the output up to 200W into 8 ohms. You’ll then need two of them, of course.

The power amp is a compact unit considering its price, and while hefty for the size, weighs in at a reasonable 18kg. Most price rivals tend to be more powerful, larger and heavier – all things that may impress, but have nothing to do with performance.

The Nagras prove gloriously unfussy, performing well regardless of source and speakers chosen.

We start with Olafur Arnalds’ Found Songs and are soon enthralled by the amplification’s subtlety and resolution. This pairing uncovers a stunning amount of detail and renders it with delicacy and precision.

We hear low-level instrumental strands that we’ve never noticed before and lush sonic textures that most rivals would gloss over.

Every sound and note fits together seamlessly, forming a wonderfully cohesive and musical whole that sweeps us away. Through this amplification, the album is more poignant and affecting than we’ve heard it before.

When the performance is this good, the mechanics of hi-fi – electricity being manipulated, the zeros and ones in the signals – are the very last things on our minds.

We switch to Kanye West’s Yeezus and find that for all its sophistication and refinement this Nagra pairing can also pack plenty of punch. It sounds solid and confident with the album’s hard-hitting tracks and delivers rhythms with surefooted enthusiasm.

There’s no shortage of excitement here, nor is there any fudging of the issue with any harshness or aggression in the recording. While this pre/power combination won’t make a meal of things, its transparency ensures that shortcomings in the recording (or sources, for that matter) are obvious.

Stravinsky’s The Rite Of Spring comes next. This is a fabulously dramatic piece of music that’s as demanding as anything we’ve come across when it comes to dynamic swings and instrumental complexity. It swings from sparse to seismic with barely a breathe between the two.

The Nagras take it all in stride, sounding agile and organised. This pre/power combo deals in composure and finesse even with the music at its most ferocious.

At the same time, we’re aware of the convincing tonal neutrality, the natural instrumental timbres and the amplification’s ability to deliver fluid, and far reaching dynamic swings. It really is a terrific all-rounder, but not quite perfect.

While the power amp has a decent amount of muscle, you’ll have to look further up the company’s range if you have particularly inefficient speakers or a large room and play at high volume levels. A 100W per channel will only go so far.

Also, this pairing doesn’t quite manage to generate the sheer scale or overall sonic authority of similarly priced (and more powerful contenders) from the likes of Burmester or Mark Levinson.

Equally, the Nagras pull ahead when it comes to tonality, transparency, dynamic subtlety and rhythmic precision. You pay your money.

For us, the Nagra’s impressively broad spread of talents wins out. Once in full flow it leaves the music to take centre stage and does its work quietly from behind the curtain.

Make no mistake; the Classic Preamp/Classic Amp combination is exceptional.