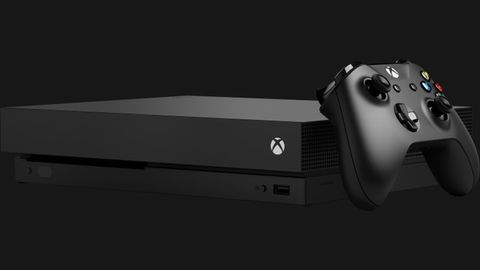 The Xbox One X is a capable all-consuming box of 4K tricks, even if it isn't the final word in outright quality

Microsoft claims the Xbox One X, complete with its Scorpio Engine, is 40 per cent more powerful than any other games console currently on the market.

But with great power comes great responsibility, especially if the console is going to deliver 4K gaming, 4K Blu-ray playback and 4K video streaming with enough panache to justify the £450 asking price.

So, is the Xbox One X the 4K console we’ve been waiting for?

It will probably come down to a couple of things including the exclusive games the console will have at its disposal, which console your friends are intending to buy, and of course, the price.

Microsoft hasn't been shy in pushing the abilities of the Xbox Series X. It's claimed to be four times more powerful than the One X and "the fastest, most powerful games console ever". It'll also boast quicker loading games and it has the potential for 8K graphics, which is great news if you've been an 8K TV early adopter. If you want the latest and greatest cutting-edge Xbox console, then it could be difficult to resist. It will also be able to play 4K Blu-rays just like the One X but we won't know the picture quality of the new console until we get one into our test rooms to review, hopefully, closer to the launch date.

In July we should get a closer look at what the new Xbox is capable of via an Xbox Series X event, which will showcase the console's first-party games. This might help sway your decision. We might even see the reveal of a disc-less version of the console which has been rumoured for some time now.

Of course, price is a factor with any new console and there are already some excellent Xbox deals to be had right now if you just want one of the current Xbox models. Like the upcoming PS5, the new Xbox Series X will have a price premium and we wouldn't expect much change from £500/$500 for the top model. Assuming there's a disc-less version (which is rumoured to be called Xbox Series S), we'd like to think this cheaper console will cost between £300/$300 and £350/$350. This means you could still use your old Xbox One X to play 4K Blu-rays. One thing's for sure, we'll all have some big decisions to make ahead of when the new Xbox Series X goes on sale.

Microsoft claims that the One X is its smallest console ever, but a quick comparison with its stablemate, the Xbox One S shows that although the ‘X’ is a little shorter, the top part of its chassis is actually a little wider and deeper. It's hard to tell from a distance due to the new matt black finish (there is no white option).

At nearly 4kg, it’s also heavier. But besides the size and weight, you’ll need to dust off your magnifying glasses to spot the other differences between the One X and the older console.

The front-mounted USB input and IR sensor are on opposite sides, while the eject button for the slot-loading drive is now under instead of next to it.

The cooling vents are on either side of the One X, as opposed to on top, so you could theoretically stack something on it if space is tight, although we wouldn’t recommend it.

Like the ‘S’ the ‘X’ can be positioned upright, either with or without the aid of Xbox’s optional stand.

If this were a game of Tech Specs Top Trumps, the One X would come out on top over its closest rival, the PS4 Pro. Microsoft’s console boasts a 6 teraflop graphics processor (compared to 4.2), a custom eight-core computer processor, 12GB of GDDR5 RAM (compared to 8GB) and 325 GB/sec memory bandwidth.

It also uses a liquid-cooled system instead of a conventional fan set-up, which means noise isn't excessive when pushed hard. Microsoft claims there’s been a 50 per cent increase in hard drive speed compared to the ‘S’, which translates into speedy loading times, which comes in handy when loading asset-rich games.

Like the One S, 4K Ultra Blu-ray playback is included, as is support for HDR10 and Dolby Vision.

Around the back of the Xbox One X you’ll see a couple of familiar faces in the shape of an HDMI 2.0b output sitting alongside an HDMI 1.4b input.

It’s a little disappointing that when designing new internals, Xbox didn’t take the opportunity to tweak the console’s input so you could pass-through 4K content from a set-top box, such as Sky Q, or a streamer like the Amazon Fire TV 4K.

We connect our Sky Q box to the console and operate it in 1080p, but when we attempt to up the resolution of the Sky box to 4K, it says our TV (in this case the HDMI input on the Xbox) won’t support it.

But much of our fondness for the console isn’t down to the new hardware. Microsoft’s recent Xbox One dashboard update has overhauled the user interface and it’s a welcome change.

On the surface, the new layout is a big improvement on the previous version.

The tab navigation has shifted from vertical to horizontal and in many cases the new arrangement allows you to reach the most relevant areas, including multiplayer, system settings and most-recently used apps and games with fewer button presses.

The console’s quick to multi-task too. Switching from a game to pick up where you left a 4K stream on Amazon Video takes just a split second.

Dig a bit deeper into the settings, especially those assigned to audio and video and it still feels a bit clunky, maybe a hangover from those ill-fated media centre PC menus that Microsoft just can’t bring itself to erase.

Getting the One X to output the relevant video resolution and audio formats to your TV and AV receiver could still be a tad simpler. For example, why have the key audio settings split across the ‘Display & sound’ and ‘Disc & Blu-ray’ submenus?

You need to download an app to play a Blu-ray disc, and the Dolby Access app to enable Dolby Atmos decoding. And if you want to experience Dolby Atmos for headphones with compatible games, that will set you back an extra £14. Really?

Although these apps aren’t huge, they still take up precious space on your hard drive. The console comes with a 1TB drive, but it’s not all available exclusively for your content. Based on some of the games we downloaded, it could run out sooner rather than later.

A handful of apps, plus the Enhanced version of Gears of War 4 and FIFA 18 had already eaten up around 20 per cent of the space available. Depending on the size of your collection, you might want to consider an external hard drive.

We’re tempted to dive straight into Gears of War 4, but instead reach for the 4K Ultra HD Blu-ray of Transformers: The Last Knight.

The biggest gains have been in the picture department. Play the opening battle between King Arthur’s army and the Saxons and the One X looks more vivid and detailed than its sibling. The X looks clearer and the lines drawn appear sharper.

The picture pops more too. As fireballs rain down from the sky, scattering soldiers like ten-pins, the yellow flames burn so fiercely you can almost feel the temperature rise.

When the alien ship breaches the ocean towards the latter stages of the film and Bumblebee and Nemesis Prime start knocking spots off each other, the sunlight pierces the sky with impressive intensity and bounces off the surface of the water.

Switch from a physical 4K format to an Ultra HD HDR stream courtesy of Amazon video and the Xbox One X keeps up appearances.

Streaming The Tick in 4K HDR, the One X has a good grasp of the action. The attention to detail on the Tick’s bold blue superhero suit is impressive from the contrasting textures of the materials used, to the moving antennae on top of his head.

Strangely, the Netflix app outputs everything as HDR, even when it hasn’t been mastered in High Dynamic Range. Adding extra processing to standard dynamic range content isn’t ideal so you might want to consider going through the Netflix app built into your 4K TV.

And talking of video quality, Gears of War 4 is one of the first wave of ‘Enhanced for Xbox One X’ titles available at launch.

Games carrying this label (and the accompanying logo) have been optimised for the console, either at the time of development, or via a patch for existing titles. It’s down to the game developers to decide what they want to implement. Some Enhanced titles will offer HDR, but not 4K and vice versa.

Forza Motorsport 7 is one of the few titles that offers the full package of 4K resolution, HDR and a high framerate of 60fps.

In the menus for Gears of War 4, you have the option of prioritising resolution or framerate depending on the game mode you’re playing. You can even calibrate overall effect of the game’s HDR and fine-tune the picture performance this way.

Playing the different modes on a suitable 4K TV, the game looks impressive and immersive. Chapters are quick to load and gameplay is super smooth at the higher framerate.

On the audio side, it’s good to finally have the option to bitstream out to an AV receiver. Those who want to see all the various Dolby and DTS logos light up their displays have finally got their wish.

Thanks to the recent Xbox One update, Dolby Atmos is also on the menu, so those with a sufficient number of speakers and compatible amp can now make the most of their set-up.

Sound quality is on a par with the Xbox One S, although to our ears, there’s a slight difference in balance.

The X shows a bit more subtlety and nuance, and during the epic final battle in Transformers: The Dark Knight, explosions hit with a fair amount of force. There’s no brightness or hardness at the top end to spoil the show.

Anthony Hopkins’ narration sounds clear and natural, and it’s easy to follow dialogue during all those relentless and ridiculously over the top set-piece action scenes.

The Xbox One X can’t quite summon the dynamic dexterity of a dedicated 4K Blu-ray player (such as the Sony UBP-X700 or Panasonic DP-UB820EB) but still manages to keep you entertained.

The Xbox interface has never been better and the X’s new bitstreaming ability brings it into line with common 4K Blu-ray decks, which can only be a good thing. There’s also a bump in Blu-ray picture quality and its audio abilities are more rounded.

But the Xbox One X isn’t flawless, and its usefulness as a 4K console partly hangs on the will of game developers. However, if you’re all geared up for 4K and want the most capable, all-in-one console currently available, this is it.