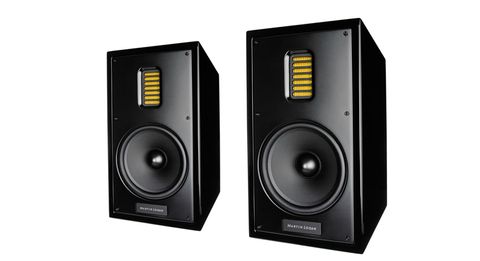 Wonderfully detailed, precise and authoritative performers, if not the most exciting around

US brand Martin Logan is renowned for its high-end electrostatic speakers, but a few years ago it set about designing more affordable, conventional speakers.

Not everybody can house giant electrostatic panels in their living room however, so these more affordable, conventional Motion speakers join the range.

Since we heard the fun and agile Motion 15 standmounts last year, three new models have joined the now 15-strong line-up, including this larger standmount, the 35XT.

The 35XTs have more in common with the Motion 15s when it comes to looks. In short, they’re gorgeous.

The sloped-top cabinets have nicely tapered corners so there’s not a sharp edge in sight, and the way the glossy black (or cherrywood) lacquer frames the brushed aluminium baffle oozes style.

The ‘XT’ stands for ‘extreme’ and the 35XT lives up to that moniker with a bigger 16.5cm aluminium cone driver (up from 13cm in the 15 model) and the trademark Martin Logan folded-ribbon tweeter, which the company claims creates a fast transient response that requires a lot less excursion than a typical dome tweeter.

It also says that the large surface area (“eight times that of a typical 2.5cm dome tweeter”) is key to creating clear, precise highs. Treble is certainly insightful and refined.

Cymbal crashes have finesse and detail, without a trace of harshness and that’s mated with a fine low-end that’s deep, powerful and well integrated.

The soundstage is big, bold and assertive, and it doesn’t take more than a song’s introduction to recognise that the 35XTs favour warmth and richness over absolute crispness.

Play The Fellowship from The Lord Of The Rings and it has no problem conveying the orchestration’s sweeping vista, getting behind the piece’s galloping sections and dramatic crescendos.

From drums to clarinets and piccolos to pianos, instruments sound startlingly lifelike – accurately discriminating between the various woodwinds. Dynamics ebb and flow nicely, though aren’t quite as subtle or far-reaching as some rivals.

The opening note doesn’t quite have as much build, and it’s easier for you to switch off at lower volumes than it is listening to the ProAc Studio 118s.

Mids can harden up a little too, with some piano notes sounding somewhat coarse. This coincided with noticeable cabinet vibrations too.

The Martin Logan 35XTs aren’t quite the nimble performers their smaller siblings are – more get-up-and-go wouldn’t go amiss – and they aren’t the most talented or all-round speakers on the market.

But if you’re willing to compromise here and there, and value scale, authority and detail, they should be considered.

See all our Martin Logan news and reviews