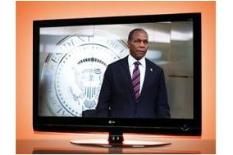 If you're not interested in Freesat it can be very easy to dismiss TVs with the feature.

After all, why spend money on something you're not going to use? That reasoning could prevent you spending the extra £90 this Freesat TV commands over its sibling LG 47LH4000. A mistake: for the £90 also buys you a significantly improved performance.

A step up from its sibling
Other than the lack of a couple of picture modes and calibration options, the menus are identical on the two LGs.

So manual calibration is just as easy on the 47LF7700 as it is on the 'LH4000. Put the Blade Runner Blu-ray on, though, and it's immediately clear that this is a step up in terms of detail and sharpness, and this lends the dystopian cityscape a more three-dimensional feel.

There's greater black depth, too, crucial for a sci-fi film like this. Crucially, though, those blacks don't stifle whites or colours.

There's plenty of insight into the dark corners of Deckard's dingy apartment, and the blinking lights of the obelisk-like skyscrapers twinkle against the perma-night sky.

Overall colour neutrality is a shared trait, too, but the 'LF7700's deeper blacks create a little extra vibrancy.

The traits discovered on Blu-ray carry over to the Role Models DVD: sharp, detailed, vibrant and punchy.

There's occasional shimmer in fast motion and a touch of over-exaggeration to edges at times, especially compared with more premium sets we've seen, but, taken overall, the sharpness and detail recovery is very impressive.

In fact, the only way in which the 47LF7700 lets itself down even a bit is in its sound. The special sound modes are best turned off in favour of a flat EQ, but even then it's a little sibilant and lightweight.

Still, given the all-round excellence of the picture, a slight loss in sound quality seems a small price to pay. Whether you want Freesat or not, this is the pick of the big-screen bargains.