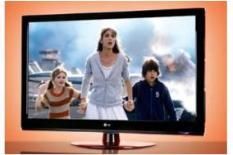 Big screen thrills for less than £800? Tempting, to say the least. But, for just a little bit extra, you can get even greater performance

This neatly priced LG LCD set does without the Freesat tuner of its 47LF7700 sibling, but it also costs £90 less, making it one of the cheapest sets at this screen size.

Not that that's reflected in the specs, mind you. This set has 100Hz motion processing and a USB input, as well as ISF calibration setups and advanced picture modes that the 'LF7700 doesn't, like Dynamic Contrast and Dynamic Colour.

Calibration best done manually
As with other LGs we've seen, the ISF modes are best avoided in favour of a manual, THX Optimizer-assisted calibration. Still, given the extra picture options available, it's perhaps surprising that the 47LH4000 can't match the 47LF7700 for performance.

Play Sunshine Cleaning on Blu-ray, and the 47LH4000 produces pictures with lovely, natural colours and decent detail given the budget price-tag of the set.

The problem is that, as well as offering a Freesat tuner for your extra £90, the 47LF7700 also gives you greater detail, vibrancy and punch. Next to its sibling this 'LH4000 looks a bit soft and pale.

The cracks and chips in the walls of the victims' homes are less well-defined, and the image is less three-dimensional. The same can be said of the freckles and imperfections on the faces of the characters, and individual strands are less identifiable in a head of hair.

Great motion processing
Where it does match its peers is in its 100Hz motion processing. Vertical pans are amazingly solid and stable, and although there's a touch of judder and smear in especially challenging horizontal movement, you have to pay a lot more money to do better.

Switching to standard-definition confirms these qualities: the Blood Diamond DVD has impressive motion and natural colours, but it's softer and less detailed than its stable-mate, while News 24 on Freeview is eminently enjoyable given the size and price of the screen, but can be bettered if you spend a bit more.

This LG punches above its price tag with sound, though, producing audio with more weight, solidity and bass extension than its closest rivals.

Even so, it's hard to recommend against paying the extra for the Freesat-toting 47LF7700.