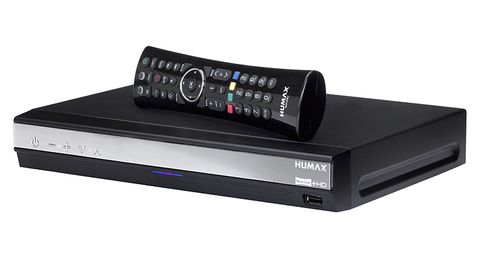 The formality of another Humax five-star review should not detract from the talent of its boxes, nor the joy of watching them.

You need hardly be in British Mensa to recognise the pattern here: Humax releases a home recording device, it gets five stars – it’s as straightforward as that.

Like the underappreciated factory worker who punches the holes in Polos, Humax knows its role and gets on with it.

You’ll have noticed, then, the five stars at the top of this review suggesting, or rather denoting, that the rousingly named HDR-2000T is no exception.

Whether this talented set top box is worth the £150 spend will depend upon your specific needs, but not the quality of the work it does.

This is a Freeview HD+ digital TV recorder, which essentially means you have subscription-free access to the live broadcasts of all Freeview channels, including ten in high definition, and its radio stations, and can record up to 300 hours of standard definition or up to 125 in HD.

As ever, though, Humax enables this in the most intuitive way it can; an eight-day television guide allows you to plan well ahead, with a series record function eradicating the need to do so manually for the same show each week, and a twin digital tuner allows you to record two programmes simultaneously or record one and watch another.

You can begin watching your programme even if it’s halfway through recording, and you also have the power to pause and rewind live TV.

Sounds simple, doesn’t it? But this is precisely what we mean by Humax knowing its part and playing it; we’d soon notice if any of these were missing. But this is, of course, more than just a television recorder.

Like the rest of Humax’s range, it has a well-stocked suite of smart features, including catch-up channels and access to YouTube and internet radio, as well as the ability to play videos and MP3, and share photos via its USB ports.

Our expectations of Humax products are such that it’s only really disappointment that could surprise us, so perhaps we’re less enthused than we could be when we lift the HDR-2000T’s stylishly slick chassis from its box.

The remote control isn’t the most substantial we’ve grasped, but it’s comfortable and no trouble to use. Set-up is as simple as plugging in power, TV aerial, Ethernet cable (a dongle is available separately for wireless connection) and HDMI into our TV, in this case the Samsung UE65JU7000.

Switching the box on, we breeze through the opening setup menus, update to the newest software, and that’s it. There’s nothing more to it; within five minutes we’re ready to flick through the Humax’s functions.

Whereas the home screens on these boxes have in the past been quite colourful affairs, the HDR-2000T seems to have opted for a more reserved, cleaner setup.

We stick on Flog It on BBC1 and are prompted immediately to press OK for the HD service, a shortcut available wherever there is an HD alternative, but stop first to admire the picture in standard definition.

Flicking between the two broadcasts, it’s clear that if the Humax box isn’t giving us as good quality as the direct feed from our TV, but the difference is relatively small.

We also press pause and play a few times – a fun game in itself – and are pleased with the sensitivity of this live TV control.

Sound quality too, is as we’ve come to expect from this class-leading TV; switching to YouTube we play the video for Frightened Rabbit’s Get Out and enjoy as dynamic and expressive a performance as our telly speakers are capable.

Essentially, you can be assured the famed idiom about cooks and broth does not apply here.

So, a familiar pattern then? Don’t say we didn’t warn you.

But if it’s too repetitive, come back when a Humax box doesn’t get a five-star review; that’ll be the day it doesn’t do everything it says on the box.

See all out set-top box reviews