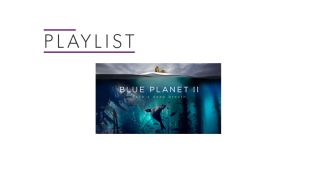 Like Planet Earth II before it, Blue Planet II has redefined what we expect from a documentary: from the previously unseen stories uncovered to the quality of the pictures, to the attention paid to the soundtrack. The icing on the cake is Sir David Attenborough, surely one of the best people on the planet, who provides placid but informative narration, at once both excited enthusiast and concerned ecologist.

As you might expect, this is a must-buy 4K Blu-ray.

Blue Planet II, should it have passed you by, concerns everything to do with our oceans. As they cover 70% of Earth’s surface there was naturally plenty of material, hence some 6,000 hours of underwater footage went into the making of this show. The team behind the series even invented new equipment to take the footage to the next level (or depth), and the audio and video quality of the show really does set a new benchmark.

There are seven episodes in total, presented across six 4K Blu-ray discs and standard Blu-rays. Sadly the Blue Planet II diaries, the excellent behind-the-scenes footage found at the end of each episode, are only on the Blu-ray discs - they were shot in HD.

The 4K Blu-ray is presented as it was shot: 3840 x 2160p 4K video, with HDR10 and in a 1.78:1 aspect ratio. The HD version of the show looked impressive enough, the 4K HLG footage released on iPlayer ramped things up a notch, and this 4K Blu-ray delivers the ultimate in picture performance.

It’s fair to say every episode is filled with highlights. From the detail on the skin of the dolphins, to the sunlight shining through the ocean, episode one (One Ocean) sets a high bar. A sex-changing wrasse provides a remarkable display of texture and colour, while a quick trip to the Arctic allows for yet more jaw-dropping landscapes - the cold blues and whites reveal surprisingly striking contrast levels.

Silvery swordfish and scavenging sharks provide more opportunity for impressive camera work and scarily revealing levels of insight in episode two (The Deep), while episode three (Coral Reefs) is a picture-postcard treat for your eyes thanks to exotic fish and colourful reefs.

And on it goes. Each of the seven episodes tackles a separate section of the seas, and each delivers a succession of stunning shots of the life and landscape therein. If ever there was a disc to show-off what 4K and HDR video can do, this really is it.

Hans Zimmer is back in the hot-seat for the soundtrack, following on from where he left off with Planet Earth II. And while it’s not quite as over-the-top as some of his Hollywood workouts, there’s a healthy dose of ‘epic’ here.

For the most part, it’s welcome and, indeed, fitting - seeing animals and environments that haven’t been filmed before certainly warrants a stirring soundtrack. Only on occasion, and with repeated viewing, does the accompaniment at times seem a little over-egged.

There’s no denying the quality, mind. The squeaks and whistles of the orca, communicating with each other as they hunt herring, sound other-worldly, while the thuds and punches of their tails as they stun and eat their prey are delivered with precise heft. Tiptoeing penguins and scurrying crabs are brought to life with pads and shuffles by a 4K Blu-ray with impressive dynamic reach.

Listen on a soundbar or pair of speakers and you'll enjoy the clarity in the midrange. The level of detail in Attenborough's soothing narration is joined along the way by the pops, grunts and snaps of his underwater subjects - and a near-constant accompaniment of sea sprays and tidal trickles. There's never a quiet moment, but nor does it ever sound too busy or confused.

Switch to a surround-sound system to enjoy the DTS-HD Master Audio 5.1 soundtrack and it really does sound like there's an orchestra in the room. As with the best surround soundtracks, the rear effects are subtle but effective, for the most part enveloping you in sound smoothly rather than suddenly.

There are welcome exceptions. Episode six (Coasts) shows sea lions working as a team to hunt tuna and, as one calls to another, the sea lions' conversation moves smoothly from one speaker to another. The surprisingly dramatic puffin feeding time - yes, really - gives our reference system plenty to do, with wind and water swirling around the room, adding to the tension in the scene.

From stirring strings and hefty bass punches, to the slithering sounds of bottom-dwelling starfish and anemones, the threads of detail in every effect are at times as astounding as the images.

Blue Planet II is a brilliant TV series presented in a superb 4K Blu-ray package. It's undoubtedly one of the best discs you can buy.

Ticking all of our boxes, from sheer entertainment to striking sound and vision, it really is a must-buy if you’re in the business of enjoying 4K content.