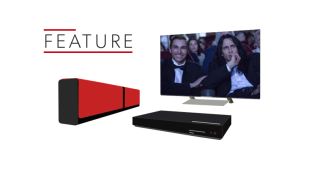 While there’s a case to be made for it being a human right, like drinking water or broadband, the sad fact is: not everyone has the means to buy or accommodate a full-on home cinema system. Relatively few people do, in fact.

But should this mean the rest of us must relinquish our right to watch our favourite films in all their glory? While there are home entertainment set-ups like this about, the answer is: absolutely not.

It all begins with the picture delivered by the Sony KD-49XE9005’s 49-inch screen. Although it might take a while to set up, once it’s ready the picture you get is well worth writing about.

Immediately, the depth of the image is striking. The XE9005’s handling of subtle detailing and colours distinctly (but not jarringly) separates the foreground from the background, resulting in a nicely layered picture.

The Sony’s level of black tones, and the detail within them, is incredible. Feed it brighter pictures and it responds with a punchy picture that revels in action set-pieces – colours pop without becoming overbearing.

These characteristics stay with it whether you’re playing DVDs or even watching an upscaled standard-definition broadcast - it’s a surprisingly sophisticated image, especially when you remember the television is creating 95% of it.

The XE9005’s Android operating system also means you get a lot of content to play with. There’s the staple range of catch-up apps such as BBC iPlayer, ITV, All 4, and Demand 5, as well as streaming services from Netflix and Amazon Prime Video.

The focus on the Google Play store means you also get access to all the other Android apps available, including music streaming apps such as Spotify and Tidal.

On the physical side, there are four HDMI 2.2 ports to connect up Blu-ray players and games consoles, and three USB ports – two are USB 2.0 and one 3.0. Alongside these connections are a coaxial for broadcast television, satellite inputs, a 3.5mm jack and a digital optical output, as well as analogue video inputs for older devices.

For those interested in the specs, this TV boasts an Ultra HD 4K HDR screen, 10-bit colour depth and supports the BT.2020 colour space, while there’s a microphone at the top for Google’s voice control.

To get the best out of the XE9005, though, you’ll need an equally talented source. That’s where the Sony UBP-X800 4K, the company’s first attempt at a 4K Blu-ray player, comes in.

As well as the expected support of Netflix and Amazon Video, as well as BBC iPlayer, Demand 5, Spotify and an array of other options, which most (if not all) 4K TVs already cover, you can also stream your Android smartphone to the player via Miracast, while there’s support too for 3D movies and SACD playback.

There’s also a USB input, for video and audio, hidden underneath a panel on the right-hand side of the player.

Much like other Sony players, you can connect it wirelessly to other compatible speakers via its SongPal/Music Centre app, or stream the audio through Bluetooth to some wireless headphones if you don’t want to disturb others with the noise from your TV.

Twin HDMI outputs also give you the option of sending audio to your sound system and feeding a picture into a projector.

Essentially, it mirrors the Sony TV's eye for detail, irrespective of lighting, and offers those same vibrant colours without sacrificing any neutrality in tone.

MORE: 10 cracking 4K Blu-rays to test your system this Christmas

But picture is only half the battle in cinema and, while we value the native performances of both Sony products, there’s a far more immersive experience to be had when you bolt on as talented a soundbar as the Dali Kubik One.

Soundbars don’t tend to be particularly attractive, but we think this one is really quite pretty.

Those grilles are removable: red, white and black come as standard, but you can also choose from six others (ranging from purple to lime green).

Under the fancy exterior, a single piece of aluminium forms the chassis – designed to keep walls thin yet sturdy enough to suppress unwanted resonances. It’s heavy and solidly built, with a finish luxurious enough to match that price tag. It’s not just a pretty face, however. This is a serious bit of kit.

You’ll find two 25mm soft dome tweeters and two 13cm wood-fibre cones doing the leg-work. At the back is a fair selection of connections - inputs include two optical, and one analogue RCA. We’re pleased to see a micro USB input too, which means you can hardwire a Mac or PC into the Kubik One.

Three cheers if you’ve got a library of high-res tracks stored on there – the soundbar can handle files up to 24bit/96kHz.​

A sub-out socket lets you hook up your own subwoofer if you feel the need - only the most bass-crazed will feel the need, though. There’s also a switch to adjust the amount of low-frequency presence depending on the position of the soundbar.

So there’s ample low-end heft to thicken the sound, but it’s nicely controlled. The Dali manages to ping effects around meticulously, and with impressive clarity. It also makes the most of speech - voices are detailed, maintaining their textures, but never sound harsh.

Add good timing and agility and you have a punchy, dynamic soundbar that wipes the floor with its rivals.

Whether you watch a film or listen to music, the Kubik One’s greatest strength is its ability to seize your attention. It’s a thoroughly involving experience: we don’t always expect this from soundbars.

Will this system stop you ever having to go to the cinema again? Of course not. But it’s more than enough to give your friends a sizeable dose of A/V envy.

This is an LCD screen offering performance fairly close to that of Samsung’s premium QLED sets, but at a more reasonable price. It has a vivid, yet subtly tempered, colour palette, sophisticated handling of detail and an intuitive smart hub.

If you want Dolby Atmos, look to this Sony. It’s a seven-driver soundbar unit (two of which fire upwards to give that sense of height), with a subwoofer which offers weighty bass to complement the excellently integrated Atmos performance.