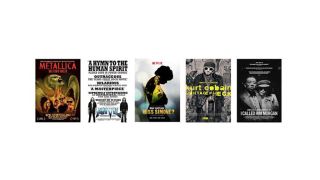 Having already cast an eye over the best music-related films available to stream on Amazon Prime UK, our attention now turns to Netflix.

The service has produced a volley of its own music TV shows and documentaries (some of which are included in this list), as well as harvesting some absolute treats from elsewhere.

More than there being something on this list for everyone, we think every music fan will find something in each of these picks no matter their tastes.

MORE: 12 of the best music-related films to watch on Amazon Prime Video UK

A four-part series that originally aired on HBO, The Defiant Ones charts the partnership between Interscope Records co-founder Jimmy Iovine and rapper and record producer Dr. Dre.

As much as being a music documentary, it's a story of entrepreneurship and how an artform helped build an empire for two pioneering individuals.

Baz Luhrmann and Stephen Adly Guirgis's 11-episode drama, cut with real footage from 1970s New York, is a kind of fictionalised retelling of the beginnings of hip-hop.

Executive produced by Grandmaster Flash and narrated by Nas, you tend to feel if these guys don't get it right then there's little hope it'll ever be done.

Another film that premiered at the 2015 Sundance Film Festival, Montage of Heck chronicles the life of Kurt Cobain – from his birth and childhood, unruly teenage years and temporary homelessness, through to success with Nirvana and tragic suicide.

Directed by Brett Morgen, the film doesn't only celebrate Cobain but also attempts to document his flaws and vulnerabilities in what makes for a convincing portrayal.

A film often described as a real-life This Is Spinal Tap, this documentary follows Canadian heavy metal band Anvil – a group set for 1980s stardom that never materialised.

With interviews from Slash, Lemmy and Lars Ulrich, Sacha Gervasi's film is hilarious, uplifting and quite truly heartbreaking.

Directed by Dave Grohl, Sound City chronicles the studio of the same name.

More than merely another collection of empty superlatives and talking heads – though Young, Petty and Stevie Nicks all feature – Grohl's passion for the space and its history is patently clear throughout.

"When Kool Herc found Apache, he was under heavy guard," Grandmaster Flash told What Hi-Fi?. "You would never see the album cover of where it came from."

Described in the film as the most important record in hip-hop, Incredible Bongo Band's Apache has since been sampled hundreds of times by the genre's most seminal artists – Sample This is both its story and a celebration of the culture it unwittingly helped to create.

Alongside archive footage, talking heads such as Pharrell Williams and Nile Rodgers give their insight into one of music's most secretive acts.

Quincy Jones is the subject of this two-hour documentary created by Netflix, celebrating his extraordinary life as trumpeter, producer, conductor, composer and arranger as well as discoverer of some of the last century's biggest artists.

It might not tread much new ground for those already well-read on the US icon – you try covering more than 80 years in 120 minutes – but it is an undeniably entertaining watch to which you'll often find yourself singing along.

Named after George Harrison's 1973 album of the same name, Living in the Material World shows the former Beatle not only as a musician but also film producer and inventor of the benefit concert.

With a band such as Metallica, it would be easy to create an compelling documentary celebrating one of metal's most successful groups.

Instead, Some Kind of Monster, filmed as the band was recording its eighth studio album St. Anger, happened to become a snapshot of one of the most tumultuous periods of their career, when the very continued existence of a legendary rock act seemed to hang in the balance.

How do you capture an artist as iconic as James Brown in only a couple of hours?

Somehow, Alex Gibney manages to achieve the feat. His documentary shows how Brown became known as The Hardest Working Man in Show Business, and aptly honours his extraordinary talent.

Kasper Collin's documentary is a love letter to the stormy relationship between jazz trumpeter Lee Morgan and his wife Helen, who was responsible for his murder in 1972.

It's a documentary that has it all, except for the long list of awards it truly deserves.

Shot! The Psycho-spiritual Mantra of Rock (2017)

"It's an energy thing," says Mick Rock. "In the height of the moment I say 'assasin', because that's what I feel like, and I'm going to take you out."

Shot! takes the photographer's camera, responsible for some of the most iconic images in rock history, and turns it around. It's a history lesson, a capturing of a culture and insight into Rock's craft all bundled into one.

It's happening with dance music just as it is with hip-hop – a kind of gateway into adulthood and acceptance as a serious genre, rubber-stamped 'serious documentary storytelling'.

With focus on and interviews with stars from the genre's past, present and future, What We Started does as well to juxtapose their various paths over time as it does charting the genre's rise.