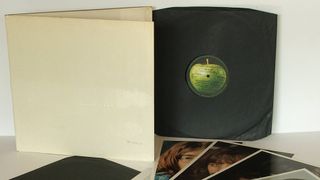 The term 'limited edition' seems these days more of a marketing tool than a denotation of value when it comes to buying vinyl.

Each year sees a raft of new releases, be they reissues or brand new music, but very few will appreciate in value in any meaningful way. That said, while very valuable vinyl is rare, it certainly does exist.

Of course, we wouldn't recommend buying vinyl solely for the purposes of making money – we're all about the tunes contained within the grooves – but we asked Ian Shirley, editor of the Record Collector Rare Record Price Guide, to pick out some of the most collectable records that might be nestling in your grandfather's sherry cabinet or could crop up in a charity shop. If you're hunting for vinyl gems, these are among the most precious of all.

Open The Door To Your Heart by Darrell Banks

This is the record to find. For 50 years, collectors thought there were only promotional copies of this soul beauty, backed with Our Love (Is In The Pocket), worth in the region of £1000. A few years back a stock copy surfaced that saw Northern Soul collectors across the world looking to re-mortgage their homes to get their needles on it.

You probably already have a copy of this in your collection. If not, you could buy an original from 1967 for as little as £40. The devil is in the detail, however, as every original copy was stamped with a unique number.

Even in 'Very Good' condition – played quite a lot – a Beatles collector would pay thousands of pounds for a copy set numbered 1-100. The holy grail is a copy numbered 1-10 as they were probably owned by them, or someone close to them! Number five sold for £19000 in 2008.

Dark Round The Edges by Dark

Some of the rarest beasts in the vinyl jungle are progressive rock bands from the late 1960s and early 70s, from King Crimson to these obscure boys from Northampton. Dark self-pressed a limited edition of this LP as a headstone to mark their demise, with only 62 copies made.

This is the rarest version that comes in a coloured gatefold sleeve, with a booklet made of photos with hand-written notes. The black-and-white edition is £4000, and a test pressing £6000. The LP has been reissued several times, so you can get a newer copy for £20.

God Save The Queen / No Feeling by Sex Pistols

One of the most sought-after singles in the world is this withdrawn classic by the Sex Pistols; it was pressed hastily and quickly recalled with most copies being destroyed. There are probably only around 50 copies left.

Most punk collectors would love to own one of these, but finding a copy is as hard as raising the cash. Test pressings of this A&M version are worth £7000, but those looking for a cheap replica should steer clear of the vast number of bootleg copies that have been doing the rounds – unless you want to frame one for display.

This ‘preview’ edition of fourth album Hunky Dory was pressed up in limited numbers, and comes in a white sleeve with typed track listing and hand-written details stating “David Bowie Hunky Dory Preview Pressing 19 October 1971". It's near impossible to find, meaning Bowie collectors will pay through the nose for one.

Bohemian Rhapsody / I'm In Love With My Car by Queen

This particular edition was limited to 200 copies on blue vinyl in a picture sleeve, to celebrate EMI's winning of a Queen's Award for Industry for the company’s record sales. It was given out at a drinks reception and was never for sale in the shops.

It remains the most sought-after Queen record, although the cigarette lighter, pen, invite and other sundry items that came with it are equally hard to find.

Another moody and rare progressive private pressing sought after by collectors around the world. Only 99 copies were pressed of this self-financed debut LP, recorded to get more live work and maybe a record deal. Most original copies are damaged as they made the sleeve too small, so when they stuffed the record inside it split the edges.

You can still enjoy this LP by buying the 2012 repressing from Spain on the Guerssen label – a bargain at £30 and the sleeve fits the record – and Complex did a second LP in 1971 called The Way We Feel, which can go for £1000.

Back in 2013 the two members of Boards Of Canada snuck into a few record shops on Record Store Day and put this single-sided 12-inch into the racks. Only six copies were pressed and only four of those ever surfaced, meaning there are two at large somewhere awaiting discovery.

The first pressing of their Twoism LP from 1995 is also rather valuable – it was limited to 100 copies and sells for around £400 today.

When it comes to collectability, the passing of an artist can heighten the prices of already rare records. George Michael’s third solo LP Older sold millions of copies on CD, but there was only a tiny run on vinyl for the entire European market.

Copies have changed hands for up to £800, and this really is an LP you could stumble upon in your own collection – people just don’t realise how rare it is.

Disco has its obscure self-released singles just as every other genre, and some can be worth a fortune. Hailing from Pittsburgh, Steel City Connection recorded this one single before fading from the light.

It sounds fantastic but is near impossible to find. Thankfully, it was finally reissued earlier this year by Kalita Records – their 12-inch edition, featuring a previously unheard extended version of Dansation, is yours for only £10.