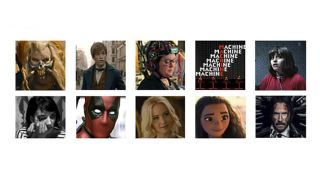 Our rigorous home cinema testing here at What Hi-Fi? wouldn't be possible without the right Blu-ray discs. And while we receive plenty of new releases in cutting-edge formats, we often find ourselves going back to the same, familiar discs in order to highlight a system's strengths or flaws.

That's why we've got a mix of discs here, from 4K Ultra HD Blu-ray, standard full HD Blu-rays, discs with HDR and Dolby Atmos soundtracks. There's even some in 3D - because we're nothing if not nostalgic.

Below we've selected 10 of our favourite test discs that cover every aspect of your system's picture and sound - and they're all fine additions to your film collection too.

MORE: 10 of the best tracks to test your headphones

Lush colours, plenty of vivid contrasts, gorgeous cinematography. Mad Max: Fury Road is an action film like no other – essentially an intense two-hour chase scene with incredible, high-octane choreography and stunning visuals using colour in the most effective way.

It's almost stylised, but it takes action cinematography to a whole new level. Rarely do you see such action with such clarity. The 4K HDR picture is pristine, dazzling you with every detail of coarse sand, gritty vehicles or fiery explosions.

The soundtrack, created by Tom 'Junkie XL' Holkenberg, is furious too, and uses what seems like all the drums in human existence. You’d better hope your cinema system has the sheer power and organisation to handle this beast of a film.

Fantastic Beasts and Where to Find Them

Fantastic Beasts and Where to Find Them invites us further into the magical world introduced in the Harry Potter films and, apart from being a rather fun way to spend two hours, the 4K Blu-ray disc is a serious test for your home cinema system.

Within the first five minutes the film’s logo screen has provided an instant test of backlighting, the brief magical battle has offered a sample of the dramatic contrast on offer, and the ferry that delivers protagonist Newt Scamander to New York has put your TV’s motion-processing through its paces.

There are regular switches between scenes with neutral, balanced colours (pretty much any on the streets of New York) and those with vibrant, other-worldly hues (the wondrous inside of Newt’s suitcase).

Combined with a captivating surround-sound score (even more atmospheric if you’re listening to the Dolby Atmos soundtrack), it’s currently one of our favourite test discs.

Christopher Nolan followed up The Dark Knight with Inception, where ‘dream thieves’ infiltrate and steal secrets from people’s minds. As we’ve come to expect from Nolan, it’s an artful, epic piece of large-scale filmmaking.

Don’t expect a razzle-dazzle visual effort. Nolan’s preference for a natural look means colours don’t necessarily pop in HDR. It’s the slow-motion sequences, which indicate the passing of time between each dream level, where fine detail and sharpness are given a platform to shine.

The propulsive DTS-HD MA 5.1 track will put your system through its paces. It's an effort full of impact, with dynamics that resonate and plenty of low-end reach - a feature aided by Hans Zimmer’s influential score. Its clever use of Edith Piaf’s Non, Je Ne Regrette Rien and what’s now known as the ‘Inception horn’, blurs the line between score and sound design.

We were lucky enough to see Kraftwerk’s 3-D: The Catalogue at Dolby’s London HQ, home to what must be one of the best Dolby Atmos cinemas in the world.

We aren’t suggesting you need a cinema room as extensively kitted out as Dolby’s own to enjoy this quite brilliant concert film, nor a 4K screen – but it’s a great workout if you’re extolling the virtues of an Atmos system.

There is no crowd noise heard on the film, so it fails to capture that live atmosphere (the bedrock of most concert films) by design. What it does allow, with the performance cleaned up in such a way, is a cohesive and unobtrusive integration of Dolby Atmos to otherwise squeaky-clean renditions of the hits.

Paired with a big screen (preferably 3D), it’s quite the immersive AV performance.

Alfonso Cuaron’s film is both intimate and epic, telling the story of Sandra Bullock's Ryan Stone as she makes her way to terra firma after a catastrophic accident in space.

Films set in space should be a fine showcase for black performance. Here it's solidly resolved and deep in depth, and the strength of the black performance contributes to Ryan's isolation against the void of space.

In space no one can hear you scream and that's very apparent here. Gravity is a great tester for silence, but there are plenty of audible sounds too. You'll need a system that can sift through detail, with an excellent sense of clarity and a wide dynamic range. While it can be discreet, there are impactful moments of bombast that add to the film's tension.

Steven Price’s score is another effort that also functions as sound design. A system that can marry all this into an engaging whole will help bring the film to life.

A Girl Walks Home Alone At Night is a vampire movie, but before you start to worry it will be just another Twilight, let us dispel your concerns. This is a wonderfully original film from Iran that focuses on themes of loneliness and acceptance, and blossoms into a sweet, romantic tale.

It's shot in black and white so, even in modest 1080p, will test your display’s crucial handling of contrast – be it an OLED or LCD screen. The soundtrack, meanwhile, is much more colourful, ranging from upbeat Iranian pop to haunting overtones.

The whole film feels very polished and it's one we would urge you to try.

The wise-cracking, fourth-wall-breaking anti-hero of the X-Men universe was a surprise R-rated success, thanks to a foul-mouthed and irreverent script, unflinching violence and a spot-on lead performance by Ryan Reynolds.

The 4K HDR transfer of the film is a step on from the standard Blu-ray: colours are richer and more solid, shadows are deeper, and Deadpool’s red suit is more pronounced, with all the nicks, dirt and blood on it startlingly realistic.

The Dolby Atmos soundtrack gives the film a grander feel but, at its heart, you need a sound system that’s agile enough to keep up with the quick-fire jokes and sarcasm - as well as the wince-worthy sounds as Deadpool punches, shoots, cracks and slices his way through the film.

If there is one genre guaranteed to give your home cinema system a workout it’s big-budget Hollywood sci-fi. Passengers is a typical example of the art, with little expense spared in turning out an immaculate image and dramatic surround-sound.

The opening sequence is a beautifully crafted scene, with the emptiness of space shattered by a lovely sprinkle of stars as the starship hits a meteor shower. There’s plenty of scope for stressing your display’s motion-handling and 4K HDR skills. The internal scenes are great for testing subtle textures and the ability to reproduce varying shades of colour.

The film’s climax puts your sound system through the grinder thanks to wide dynamics, low-end excesses (there’s always explosions) and the truly wrap-all-around Dolby Atmos surround sound field. While the film may not be flawless – the pace is uneven and the script could be sharper – there’s enough in the way of large-scale action set pieces to keep things interesting.

There are plenty of films that we’re dying for Disney to release in glorious 4K HDR – the Star Wars and Marvel franchises, for instance.

But a recent film we’d love to see given the 4K treatment is Moana. It’s a classic Disney animation, with a story that’s full of heart and humour, a rich soundtrack and stunning visuals that will take your breath away. From the true-to-nature detail of the thriving Polynesian islands to the realistic way hair and water are animated, every frame of Moana is an absolute feast for the eyes.

This is a film that has a giant, mad, glittering crab that sings like David Bowie - of course you need to see it.

John Wick is the best thing Keanu Reeves has done since The Matrix. In fact, the retired-but-not-anymore hitman is probably cooler than Neo in every way – better suits, better gun fights, better one-liners.

The film’s cool, blue-tinged palette is interspersed with warm tones that just about infiltrate the dark corners of this exclusive criminal underworld. The lush, elegant interiors of The Continental hotel are achingly cool – they look glossy and inviting even as henchmen are being shot left, right and centre. It’s a real test for your 4K HDR display’s subtlety and contrast.

But it’s your surround system that needs to have ballet-like poise and agility, alongside huge reserves of muscle and punch, to handle the exquisitely precise choreography of Reeves/Wick’s ‘gun-fu’ action style as he wreaks vengeance on those who killed his dog. The Dolby Atmos soundtrack engulfs you in the club scenes, but we prefer the straightforward 5.1 sound for how it deftly combines deep bass notes with pinpoint accuracy when it comes to any fight scene.