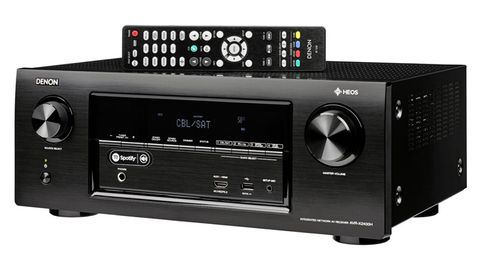 It’s not a giant leap forward, but this feature-packed Denon amp is now the one to beat at this price

The affordable AV receiver Award is one of our most hotly contested categories, yet Denon has managed to run off with the Product of the Year gong in that sector for the last two years in a row.

Can the new Denon AVR-X2400H – the successor to last year’s Award-winning AVR-X2300W – repeat this winning performance?

With the Blu-ray of Fantastic Beasts And Where To Find Them playing, our first impression is that the Denon AVR-X2400H’s character is very similar to that of its predecessor.

Ample detail is delivered with delicacy. Voices have a natural warmth, and there’s a spring in this amp’s step that means surround effects are steered with agility and precision around the room.

It’s an articulate, measured performance. As we’re introduced to one magical creature after another, the Denon does a wonderful job of conveying the dramatic tension as characters happen upon large, wondrous beasts.

Meanwhile, the amp’s insight and prowess in tracking sound effects around the room directs you to the smaller creatures whizzing to and fro in the background.

The explosive scenes are just as enjoyable. There still aren’t any giant leaps forward when it comes to all-out scale and muscle (you can go to Yamaha for bigger, more powerful sound), which is a little bit disappointing - we’d have liked a bigger performance from this amp.

The Denon sticks, not unreasonably, to its refined presentation. But given the price, there’s still decent wallop as gigantic beasts thump across a frozen river, and as magic spells blast chunks off buildings.

We unbox the AVR-X2300W for a direct comparison, and find the X2400H sounds a touch more solid. Rumbling thunder and explosions sound a little deeper and punchier, leaving the X2300 a touch vague in contrast when it needs to make an impact.

The X2400H sounds marginally crisper throughout as well. You can hear slightly more detail in the swish of a cloak or in sharp, shattering glass. Dialogue, in particular, is clearer and packs more emotion.

That articulate, nimble nature lends itself well to playing music, too. While it’s no substitute for a dedicated stereo amplifier, the Denon amp sounds dynamic and enjoyable enough when listening to a concert Blu-ray or songs streamed over Bluetooth.

AV receivers aren’t the first in line when it comes to cosmetic upgrades, but arguably they don’t need to be. We want our AV receivers to be built like a brick, work smoothly and last for a few good years. The Denon AVR-X2400H ticks all those boxes.

It’s a solid, well built box, with a clear display that’s easy to read and buttons and dials that respond instantly. Denon has included shortcut buttons to your favourite inputs on the front, too, and the remote is intuitive to use.

To get the amp sounding its best in your room, we’d recommend setting it up using Denon’s auto-calibration system and the included mic and rocket-like cardboard stand.

The process is swift (you don’t have to do all eight mic positions, just the first three will deliver a workable sound) and largely accurate. We’d urge you to go into the manual speaker settings to tweak them if needed, though.

A £500 AV receiver these days is packed with more features than a cutting-edge smart TV. From the latest video support to hi-res music and multi-room streaming, this Denon AVR-X2400H is a multi-tasking multimedia hub for your home.

Let’s start with film: the Denon amp comes with Dolby Atmos and DTS:X support straight out of the box. This 7-channel amp can be reconfigured into a 5.1.2 arrangement using two Atmos speakers.

MORE: Dolby Vision HDR - everything you need to know

When it comes to music, the Denon can play high-resolution files up to 24-bit/192kHz in all popular formats. It even supports DSD playback, and the USB port on the front panel will play media files from a hard drive as well as charge your smartphone.

That’s not all: you can stream tunes from your smart device or laptop thanks to Bluetooth and AirPlay, and there’s support for Spotify Connect. You can connect the amp to the internet via wi-fi or through the ethernet socket (our preferred method for greater stability).

Last year’s support for HEOS started at £1200 with the AVR-X4300H - this is the first time Denon has introduced HEOS into its more-affordable AV products.

You can also stream from Tidal, Deezer, TuneIn radio and more using the HEOS app (which is nicer to use than Denon’s clunky AVR control app).

There’s no doubt Denon has continued its strong recent performance and, as things stand, it may have done enough to hold on to its position as the £500 AV receiver of choice come 2017 Awards time.

But while it’s an articulate and enjoyable performance, improvements are incremental. They’re a worthwhile, but not huge, step up from last year’s AVR-X2300W.

And this puts the 2400 in an interesting position. We’re left wondering if this slightly conservative approach leaves the AVR-X2400H vulnerable to new 2017 amps from fierce rivals such as Sony or Yamaha – both of whom have the potential to unseat the Denon.

We can’t wait to see how this AV battle unfolds throughout the year, but Denon’s new amp is defintely the one to beat – for now – thanks to a combination of insightful, exciting sound and a fantastic set of features for your £500.