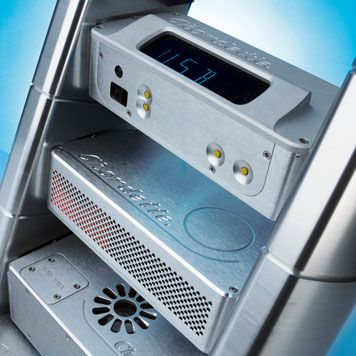 Up the best full-size preamps available at this money. A top-class product

For this review, we’ve chosen to concentrate on the core products: the Prime preamp and Scamp power amp. Yes, you’re right; the names don’t make much sense…

For hardcore audiophiles the Prime preamp and matching Scamp power amp might be hard to take seriously, and their toy-like appearance really doesn’t help.

But treat them with the care you would afford any £2500 combo and we have no doubt they will impress.

Low power, but high quality
Let’s get the sonic negatives out of the way first. The Scamp power amplifier delivers just 20W per channel.

That’s not a lot, and means that high volume levels are off the menu unless you use very high sensitivity speakers (say 90dB/W/m and above) or have a small room.

However, stay below party levels and the Scamp proves a talented unit.

It comes equipped with a volume control, and so can be used without a preamp, though the limited inputs (just two) will restrict its use to very simple systems – a laptop connected via USB and an analogue source through the line level input, for example.

Anything more complex and you’ll need the Prime. This preamp is pretty much Chord’s mid-sized Prima in a smaller case, and without balanced circuitry.

In use, this pairing is wonderfully clear sounding, delivering high levels of detail and lightning response.

Within the power amp’s output limits, this is an impressively dynamic pairing that delivers really pleasing subtlety and power.

The tonal balance is a touch lean in Chord’s usual fashion, but it still sounds good enough to convince. The combo’s transparency level is top-class, and its ability to define the leading edge of notes is equally so.

Switch to USB, and it’s clear that the on-board DACs in the pre- and power amps are good, no surprise considering the quality of Chord’s excellent Gem.

Use the Mogul or any other computer as source and you’ll hear all the good things we’ve been describing, provided the files are of a good standard. Uncompressed recordings work best.

Cosmetically, the logos would look better if they all lined up properly, and we wish the front of the Mogul and Prime didn’t sprout unsightly inputs. We’d like a classier remote handset, too – the system deserves it.

It’s also a little surprising that Chord doesn’t supply the Scamp with a power supply. That costs an £150 extra, and without it the product doesn’t work. None of this stops us from admiring this system, though.

This really is a case of having a high-end cake and eating it all.