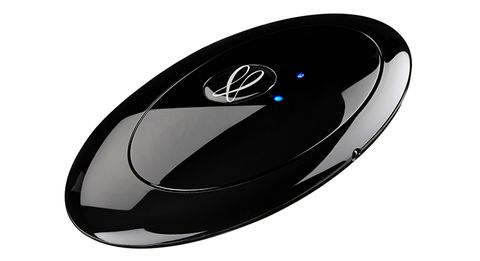 A decent streaming solution at a tempting price, but the sound needs to be better to worry the best

If you’re looking to start out in music streaming, the Cabasse Stream Source is an appealing option – and not just because of its funky elliptical shape (think Arcam’s minBlink streamer but closer to the size of a melon than a pebble).

It’s the most affordable offering in Cabasse’s streaming bloodline, boasts multiroom functionality and high-res support, and sounds pretty decent, too.

When we tested its family members, the Stream 1 active speaker and Stream 3 2.1 speaker system (we’re told the self-explanatory-titled Stream Amp is in the works), both got four stars for their detailed, entertaining sound and generous feature count, but let themselves down with a “frustratingly glitchy” and “counter-intuitive” app.

That might seem like a rather minor hiccup, but in a streaming set-up the app is the central nervous system – the gateway to your tunes. Thankfully, there is now a markedly better one: the new StreamCONTROL app.

Free to download on iOS and Android, this app is pretty efficient and, unlike the previous version (‘Cabasse Stream Audio Control’), doesn’t make us wrestle with disappearing servers or freezing interfaces.

Instead, it gets us up-and-running in no time, instantly detecting the Stream Source and our server before we even have to touch our tablet screen – that should always be the case as long as your tablet or smartphone is on the same network as the streamer.

A neat sidebar is where you’ll find your stored music and the Stream Source’s incorporated Spotify and Deezer steaming services, and be able to link Cabasse streaming products together in a multiroom capacity. As a result of lighting, audio and video company AwoX taking over ownership of Cabasse, the app can also control products in that company’s portfolio – handy if you own one.

Mostly it’s an intuitive, pain-free experience, though we’d prefer a grid display to the Cabasse’s listed folders for quicker scrolling, and the app is guilty of one annoying habit: go out of it – accidentally, or to briefly go elsewhere on your device – and on your return you’re taken back to the opening page rather than the playback screen or last-used folder.

If your device is out of arm’s reach, a small remote – a mirror image of the unit, but palm-sized – can control input and volume, and skip tracks.

The Stream Source’s multiroom capability is no doubt a selling point for those looking to expand their streaming system down the line, but anyone taking their first step into streaming can just buy the unit on its own.

It will hook up to an amplifier via its analogue or optical outputs. As well as playing files on your home network, there’s also Bluetooth with one-touch NFC connectivity – not a common feature at this price, but one we like. The Stream Source has another trick up its sleeve: a USB key can be plugged into the unit’s rear socket.

As well as playing popular formats such as WMA, AAC and MP3, the Stream Source supports high-res WAV and FLAC files up to 24bit/96kHz – sadly, it doesn’t go the whole-hog to 192kHz.

The Cabasse’s sound is a capable one: balanced, full-bodied and more than happy rustling up detail and organising it sensitively, whether it’s a 24bit/96kHz WAV or lower-res Spotify file.

Its delivery entertains. Energetic (if anything, too forward), it barely comes up for air in The Cure’s Just Like Heaven, throwing its all into the hearty stew of guitar riffs, energetic keyboards and a bass guitar that’s impressively taut and agile.

It might not have quite the immediate percussive kick of rivals such as the Bluesound Node, but we can’t knock Cabasse’s sense of drive or enthusiasm in this rock-‘n’-roll milieu. The controlled treble is a godsend when cymbals start thrashing.

Listen to something more soothing – some Norah Jones – and her distinct vocals are clear and focused, the Cabasse drawing out enough nuances to be convincing.

On the flipside, dense material – such Johann Strauss II’s Voices of Spring, Op. 410 – requires apt space and instrument separation, and this is where the Cabasse could take one or two tips.

The Stream Source captures the piece’s charisma, but its somewhat claustrophobic presentation can at times feel congested enough to make it hard to distinguish all the composition’s elements. A little more subtlety certainly wouldn’t go amiss.

Another Cabasse streaming product, another four stars. But while the outcome might be the same as before, the story here is rather different. Give and take some minor snags, we’re now satisfied with the new app software.

The Source’s barrier to a fifth star now is the competition; the Bluesound Node, for example, has a more dynamic, subtle and spacious performance, one-upping the Cabasse on its number of streaming services and high-res compatibility.

That said, the Stream Source has an entertaining sound, ample features and affordability on its side. Our ruling? It’s more than good enough to get you off the starting blocks into music streaming.