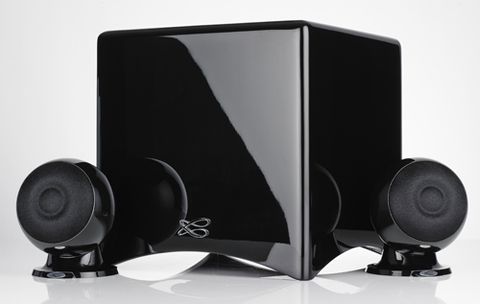 The Stream 3 is almost there. The hardware is great; the app needs development

We liked the concept of the Cabasse Stream 3 enough to give the package a “Stars of CES” Award back in January. But it’s only now that we’ve managed to get our hands on this DLNA streaming system that takes the form of a conventional but classy subwoofer/satellite package.

The Stream 3 can be wired directly into your home network, or connect wirelessly using its free dedicated streaming app (for iOS and Android). Integration is swift and painless.

File compatibility is good, the Cabasse working with WAV, Flac and AIFF up to a resolution limit of 24Bit/96kHz. There’s the added bonus of vTuner internet radio, too.

Cabasse has added Bluetooth 2.1 EDR capability, so streaming directly from a smartphone or tablet is also on the menu.

The Stream 3 also boasts an optical connection and analogue stereo input. It will even decode a Dolby Digital signal (the stereo mix) from a set-top box or Blu-ray player. This is a well-featured package.

The Santorin 21 subwoofer (above) houses all the amplification, streaming and control gubbins, as well as the subwoofer bits. Inside are three amplifier packs: an 80W module to power the downward firing 21cm driver and two 20W units for the satellites.

Each of the 13cm metal satellites sits in a clever magnetic plinth, and uses a 29mm soft-dome tweeter and 10cm mid/bass driver. Put it all together and you have a compact design that produces a decent output down to around 150Hz, at which point the subwoofer takes over.

While your phone or tablet will be the main system controller thanks to the dedicated app, Cabasse also supplies a small conventional remote as a back-up, or for when the system isn’t on the network.

The control app is a mixed bag. It’s quick to connect and generally simple to use – but it too often loses contact with servers (the server just disappears from the screen) and it freezes on occasion. Restart and all is well (for a while), but it needs development.

That's a shame as the system hardware is really good. The big problem for sub/sat systems is getting the integration between them right.

The Stream 3’s sound is close to seamless once care is taken over subwoofer placement – we got the best results when it is placed centrally between the satellites, though this may not always be convenient.

We start with a 24-bit/96kHz file of Kate Bush’s 50 Word For Snow and the sound is full-bodied and solid. It’s hard to believe such an authoritative sound can come from such a compact package. It goes suitably loud with admirable composure.

Regardless of source there’s a good level of refinement and little of the upper-midrange hardness from which most 2.1 systems suffer. With the sub placed centrally, the system does a fine job focusing vocals and instruments in a nicely layered sound stage.

For a system of this type, rhythmic drive is good and there’s a pleasing level of detail even when the recording becomes busy.

Cabasse has done a fine job with the Stream 3. It’s well specified and sounds really good for a product of this type. However, while the hardware is admirable, that control app needs some work. Its glitchy nature soon gets annoying.

We really hope Cabasse sorts this problem out soon – because the rest of the package deserves better.