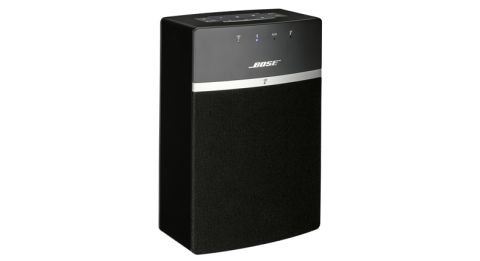 The SoundTouch 10 remains a capable wireless speaker for sound, but it's let down a bit by its app

If we can label any brand a veteran in a wireless speaker market that hasn’t even reached adulthood yet, Bose would be the one.

It has been in the game for over ten years and, following its SoundDock and SoundLink ranges, it launched the SoundTouch multiroom speakers back in 2013.

But it's now been over two years since the SoundTouch family last had an update, at which point the third generation versions of the SoundTouch 20 and 30 were released, and we first met the most diminutive model in the range - the SoundTouch 10.

Despite being slightly long in the tooth by wireless speaker standards, the SoundTouch 10 still stands up in its own right - even if the app and overall ecosystem lets the side down a little.

Bose has kept to playing it safe in the design department – ironically refreshing in a diverse market where traditional boxes sit alongside beach-ball, dragon-egg and Zeppelin-shaped structures – even if the word ‘unadventurous’ is on the tip of the tongue.

Still, top marks for consistency: it looks every bit a Bose speaker. Classic-looking, juice carton-sized and available in black or white, the SoundTouch 10 is clothed from the shoulders down and resembles a mini radio.

It’s too small to feature its siblings’ OLED display (instead white lights across the top indicate source selection) and omits an Ethernet port for wi-fi connection only, though is just as well-equipped elsewhere.

You can stream music (whether it’s MP3, WAV or, thanks to a recent software update, FLAC files) directly from a laptop, NAS drive, smartphone or tablet over wi-fi or access a world of internet radio. Bluetooth lets you take playback offline, while a handy 3.5mm input is onboard for direct plug-in.

This is now the only way to play Spotify music on Bose SoundTouch products, despite the service being built into Bose's own app not that long ago. This can make for a somewhat disjointed experience, but it's also now the norm for streaming systems, with Sonos the only major player still fully integrating Spotify into its own app.

Deezer, Amazon Music and TuneIn complete the music services selection, and these are incorporated in the Bose app as you'd expect. Subscribers to other services, such as Tidal, are left out in the cold.

The app, once considered one of the more comprehensive around, now looks a little rudimentary next to some rivals.

It picks up networked music quickly and easily, and is easy to operate - but it lacks some quite basic features. One major frustration is there's no obvious way to add tracks to an on-the-fly queue, with anything you press simply replacing whatever is already playing. There's no universal search function, either.

It's this sort of thing that makes the Bose app feel less thoughtfully designed than that of many rivals.

On the other hand, one of its biggest assets is its shortcut system: six presets – not only down the left-hand side of the app, but on the unit and supplied remote too – can be allocated an artist, song, playlist or internet radio station for one-button access.

Want to favourite BBC Radio 2? Play the channel, press and hold the preset and hey-presto.

In short, the app is a bit of a mix of good ideas and missing basics, and it's been left behind not only by market leader Sonos but also newer rivals such as Denon's HEOS.

The app is at least easy to use and takes care of multi-room tasks with aplomb, so several SoundTouch products can be controlled individually in one place or grouped together to play music in harmony; tap ‘Play Everywhere’ and, well, you can guess what happens.

Grouping (and ungrouping) speakers is intuitive and prompt; juggling different songs on different speakers is a piece of cake; each speaker opens up its own full-page window, so the interface never feels cramped.

Set-up is easy, too – simply download the app, select ‘add system’ and follow the clear on-screen instructions – and only takes two minutes of your time, so any multi-room newbies out there shouldn’t be put off.

Small speaker, small sound? Not on Bose’s watch. It may not fill your largest room with music, but perched on a bedside table or kitchen worktop it’ll belt out a surprisingly big sound.

It has enough about it for a small box too: weighty enough to be deemed a comfortable listen, capable of going pretty loud (even if midrange hardens up a little in higher volumes), and not shy of making its low-end presence known.

The thick bassline driven Broken Bells’ Holding on for Life has depth and substance, even if the Bose’s low-end tips the tonal scales slightly in its favour.

Synth lines and keyboard harmonies are clear and perky too, and the Bee Gees-esque vocals are wrapped in character. You get a hint of their dynamic flavour, the SoundTouch 10 lifting them in the right places, although the Audio Pro Addon T3 (our 2015 Award winner, no less) shows its truer colours, and asserts its superiority with more detail and spaciousness.

There’s a bit of coarseness to the treble that the song’s cymbals can’t shake off, too.

The SoundTouch 10 is as accomplished in its own right now as it was when we first reviewed it back in 2015.

Weighty and dynamic for a speaker of its size and price, only a little coarseness to the treble and some exceptional rivals hold it back as an individual wireless speaker.

But the app, once considered one of the better examples around, now looks short of streaming services and less thoughtfully designed than that of a number of rivals.

If all you're after is a small wireless speaker for Spotify Connect and internet radio, the app's relative shortcomings need not put you off entirely, but for those with more adventurous intentions, there are a number of better options out there.