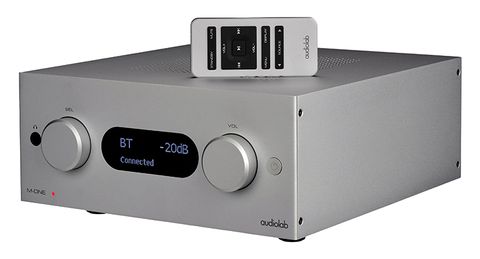 An entertaining and well-equipped amplifier for the money, just not a class leader

Anyone who’s ever tried cramming two weeks’ worth of holiday clothes into a carry-on cabin suitcase will sympathise with Audiolab’s concept for its latest integrated amplifier.

So, how do you pack a pre/power amplifier and aptX Bluetooth receiver into the same compact chassis as the company’s flagship digital-to-analogue converter, the M-DAC+, without compromising performance?

This is the 40W-per-channel M-ONE, and judging by appearances alone, we’d give Audiolab’s design team a pat on the back for their efforts.

Physically, it’s pretty much identical to the flagship M-DAC+, with the same boxy aluminium case – a far cry from the full-width chassis of Audiolab’s other stereo amplifiers – central OLED display and double rotary dial, all coming together to create a friendly, contemporary aesthetic.

Of course, it’s heavier than its DAC cousin, the power amp stage adding on the pounds.

Calling the M-ONE ‘the M-DAC+ with amplification and Bluetooth’ would be misleading, though.

Though it shares the DAC technology with Audiolab’s standalone models, it features the two-channel ESS9018 K2M chip, the ‘little brother’ of the eight-channel ESS9018 used in the M-DAC+.

It does, though, nab the headphone amp straight from the M-DAC+ and its predecessor the M-DAC - you can use that via the 6.3mm jack on the front panel.

Around the back, two asynchronous USB inputs – one type-B for PC and Mac compatibility, one type-A for Apple devices – support 32-bit/384kHz and DSD256. Single optical and coaxial inputs have a resolution compatibility of 32-bit/192kHz, and there’s a pair of line-level inputs too.

The seven sound settings for PCM files found in the M-DAC+ have been whittled down to three, but join the same four settings for DSD files.

Predictably, the M-ONE bears an unmistakeable likeness to the M-DAC+’s insightful and authoritative sound, crisply drawing instruments in a soundstage that is not only big and expansive, but also fastidiously well staged.

Beyond size and scale, it enunciates with generous detail, particularly in the midrange.

The Audiolab is fluent and focused with the melodic piano in Ludovico Einaudi’s Ancora managing to deliver its flowing nature at the same time as ensuring each note is punctual, well defined and harmonious.

There’s an element of finesse to music too, without things ever sounding overly rounded.

It signals both dynamic upheavals and less apparent fluctuations with ease, so the piece brims with variation – it’s clear that no key carries precisely the same burden – conjuring vivid images of the pianist’s hands floating across the keys.

Rhythms are confidently rendered, if not quite as precisely as through the Rega Elex-R.

The collaboration between the vocal echo, snare drums, cymbals and synth riffs at the start of Major Lazer’s Pon De Floor demands tip-top timing and the M-ONE avoids getting tongue-tied even in the track’s most convoluted section.

Instruments don’t concern themselves simply with kicking right on cue, but also how they interplay with one another in the mix. There’s as much insight into the marching drum roll as the choppy synth hooks, which speaks volumes for the M-ONE’s democratic spread of detail.

While they’re backed with weight and muscle, tonally the presentation is a little lean. That thinness means it’s not quite as instantly grabbing as the Rega or Cyrus ONE, but thanks to its deluge of other talents it’s sure to grow quickly on you.

The one criticism we do have is that the treble feels a touch raw-boned, even after a weekend’s run-in - the Audiolab often snagging the edge of notes belonging to the top region of the frequency range where we’d like more warmth.

By repurposing the successful formula of the M-DAC+ for the stereo amplifier world, and further strengthening its validity with the addition of Bluetooth streaming, Audiolab has created a bold-sounding amplifier.

While it’s not quite class-leading, it is certainly worthy of its illustrious predecessors.

See all our Audiolab reviews