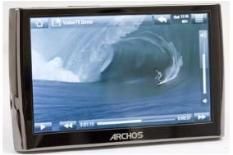 Archos has been doing its thing in the world of portable multimedia players for longer than most – but since the arrival of you-know-who to the market, it has had to up its game.

If this device from the company's range of internet media tablets is anything to go by, it's done a pretty decent job of keeping pace.

It is one of the larger portables you could spend your cash on, but it still feels sleek and slender in your hand. Could you carry it everywhere you go just tucked in to your trouser pocket? Unless your name's Coco, maybe not.

Nevertheless, if you're prepared to take the extra bulk for video, music and internet browsing on the move, then the Archos 5 has plenty going for it. The 4.8in, 800 x 480 LCD screen is the largest of the four here and the Archos 5 comes complete with touchscreen controls.

It's a clean, clear interface that provides an intuitive control system.

Sings on the internet with Opera
You'll get a solid 12 hours of music and a slightly underwhelming four hours of video from the battery.

However, the feather in this machine's cap is the internet access. Unlike previous Archos machines, this one has the Opera browser included allowing you to browse content once you're on Wi-Fi.

The large screen comes in to its own here, allowing for a bigger keyboard than the iPod Touch, for fast, error-free navigation. If you want yet more functionality, there's an £80 DVR for recording from and streaming to your TV, plus a £25 plug-in for HD compatibility.

Video performance is detailed and with good colours, although not quite as sharp and stable as the iPod Touch.

Musically, it lacks a little of the Touch's insight, though it sounds very balanced and natural.
The Archos 5 has plenty going for it in terms of performance, features and functions but rivals have managed to push the perfomance bar higher this year