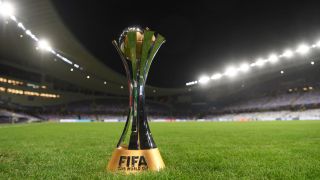 It’s Liverpool vs Flamengo in the FIFA Club World Cup final. The team news is in and Virgil van Dijk is fit to start. Get the rest of the team below and all the details on how to watch a high quality live stream of Liverpool vs Flamengo to find out which is the very best football team in the world for 2019.

The great news for Liverpool fans is that the game is free to air so long as you’re in the UK but, if you happen to be abroad, then we have some instructions below on how you can still watch Liverpool vs Flamengo at 17.30 GMT wherever you are.

The FIFA Club World Cup Final 2019 is taking place in Qatar today at the Khalifa International Stadium, Doha. The six continental champions and one host team have been whittled down to just Liverpool and Rio de Janeiro side Flamengo who will certainly be no push-overs.

Alongside their young Brazilian talent are a host of veterans of top European sides. Chelsea fans will recognise full-back Filipe Luis whose presence is very nicely balanced with ex-Bayern old boy Rafinha in the right-back berth. One-time Serie A star, Gerson shores up the midfield and it’s likely we’ll see the speedy and skillful Diego come off the bench to cause some havoc, if needed, as he once did for Juventus, Atleti, Porto and others. Last of all is the centre-back Pablo Mari who was only released by Manchester City in the summer.

Liverpool, of course, are a serious threat to any team and arguably one of the most well-balanced English sides of the Premier League era. There were some serious selection concerns in the centre of defence with Dejan Lovren, Joël Matip and Fabinho all been left at home but van Dijk is fit to play and starts alongside Joe Gomez at the back.

That leaves Jordan Henderson to slot back into midfield with Naby Keita. The full starting XIs are subs are as follows:

Watch Liverpool vs Flamengo live stream in the UK

You can catch Liverpool vs Flamengo at 5.30pm on BBC One, BBC iPlayer and the BBC Sport website.

The only trouble comes if you happen to be away from home and in another country.

Watch Liverpool vs Flamengo live stream from abroad with a VPN

British citizens who are abroad, and wish to stream the 2019 FIFA Club World Cup, may find themselves geo-blocked unless they use a VPN. It's only in the UK that the BBC holds the rights for the FIFA Club World Cup, so trying to the BBC sports website and iPlayer from elsewhere in the world will be problematic.

Fortunately, a VPN is a piece of software which masks the identity of your location by providing you with an IP address of another country. You'll need to sign up to a VPN and then use the app (mobile or desktop) to choose a UK IP through which you can watch the FIFA Club World Cup live stream.

There a plenty of good VPN services to choose from and most are inexpensive, offer 30-day access or longer, free trials, support multiple operating systems and just about every device you can think of (mobiles, laptops, games consoles, TVs, etc).

As a general rule of thumbs, we say you're best off using a paid-for version. One can never be sure of how secure the free VPNs are. Of the VPNs out there, we like:

You can get three months free when you sign up to a year-long plan, bringing VPN access to smart devices including the Amazon Fire TV Stick, laptops, TVs and both Android and iOS mobiles and tablets. It's fast, secure and super simple to use - which is why we rate it as the best!

Watch Liverpool vs Flamengo live stream in the US

Over in the States, it's Fox who holds the rights to the FIFA Club World Cup and you'll find the games aired largely on Fox Sports 2 and Fox Deportes. Those channels are available on Sling Blue, Hulu + Live TV, fuboTV and AT&T TV Now, some of which offer free trials which will last long enough to enjoy the whole competition.

The European Broadcasting Union (EBU)’s Eurovision Sport has the rights to air the 2019 FIFA Club World Cup for free in 37 territories across Europe. Viewers in the countries below will be able to view the matches on terrestrial TV and/or online:

VG+ is the service for Norway. C More Suomi and C More Sport 1 have the rights in Finland, DAZN will be showing the football in Germany, Match TV Game is where to watch in Russia and it's Saran Media that has the rights in Turkey.

Those in Australia should head to Optus Sport for the Club World Cup coverage. In Brazil it's SporTV.

Elsewhere, across the Middle East and North Africa (MENA), beIN sports will show the games on its online platform.

The fixtures for the remaining game for the FIFA Club World Cup are as follows. All times are in GMT. The games take place at the Khalifa International Stadium, Doha which is GMT +3.