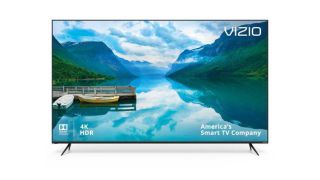 If you're looking for a cheap 4K TV, you're likely to come across Vizio during your search. Its TVs are some of the biggest-sellers worldwide, especially in the US, and the brand regularly mixes with heavy-hitters such as Panasonic, Samsung, Sony and LG thanks to its combination of extensive features and attractive pricing.

Below you'll find some of the best-selling Vizio TVs available to buy right now. We've highlighted key ranges and their features, plus we've rounded-up the best Vizio TV deals we can find across models and screen sizes.

So should you buy one? Read on and find out, as we delve into Vizio's TV line-up...

If you’re budget-conscious and looking for a 4K TV – but ideally something big enough for the living room, Vizio’s most affordable line is the D-series. It's a 2019 model too, so it's bang up to date.

The D-series features an LCD model with full array LED backlighting, but the panel works as a whole with no local dimming zones, so contrast is likely to suffer. However, a number of desirable features are still included, with voice control from Alexa or Google Assistant, Vizio Smart TV and Chromecast built-in – meaning you can cast content from a compatible smartphone or tablet to the TV.

Next up the range is the V-Series, which replaces 2018's fantastic value E-Series.

The V436-G1, a 43-inch 4K TV, has been labelled the gamers’ choice in many a dorm-room Stateside, with reviewers noting a low input lag to suit casual gaming.

Overall picture quality is good too, but while Vizio’s V-series TVs have full-array local dimming, it is limited to 10 zones, which can impact its Dolby Vision HDR performance.

With a good SDR picture and plenty of deals on the 43-inch set though, it's still a pretty tempting proposition.

Taking a step up to the M Series, the M557-G0 is a 55-inch 2019 set with full array local dimming and 16 zones, plus UltraBright 400 tech, which means it can reach 400 nits of peak brightness. That's nothing compared to the very best, but at this level it's not bad at all.

The M-Series also boasts Quantum Dot screen tech for the first time, to help produce the brightest of colours, an octa-core processor for good quality upscaling and a slew of smart features, including voice control and Chromecast functionality built in.

The set is available at Walmart for $498, which is a heck of a lot cheaper than you'll pick up a Samsung Quantum Dot-packing QLED for at this screen size.

While we're yet to get a Vizio TV into our test rooms, the pricing and feature lists of these sets alone should provide plenty of food for thought.

In a similar way that HiSense and TCL both offer plenty of bang for your buck, we wouldn't be surprised if there was a serious bargain (or two) lurking in the Vizio TV line-up. Well worth investigating...