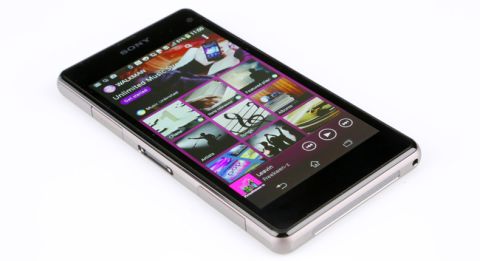 Proof that good things can come in small packages. If you like a smartphone that’s easy on the hand, then this is a good choice

With this phone, Sony tries to recreate its brilliant – but admittedly large – Xperia Z1 smartphone in a smaller, but still smart, package.

The Z1 Compact certainly has big ambitions: with the intention of going head-to-head with the Apple iPhone 5s. The Z1 Compact compromises on only a number of specs compared to its big brother, while fitting everything into a neater and lighter handset.

This Sony isn't labelled as a ‘mini’ phone and at 4.3in it sits between the iPhone (4in) and the Motorola Moto G and HTC One (4.7in) in size

However, it's 30g lighter than the full-sized Z1 and much easier to grip one-handed, even though it's slightly chunkier (9.5mm).

Sony has kept the design of the Z1: sleek and sturdy, with a plastic back and flap-covered ports with a prominent aluminium power button.

The bezels surrounding the 720p screen are fairly wide, making the Z1 Compact look slightly retro. But overall the look and feel is a smart one.

Sony has wisely kept 720p HD for the Z1 Compact's screen and at 4.3in we can see why, as the smartphone has a good 342ppi display – a significant improvement on the iPhone 5s’s 326ppi.

As a result, the Z1 Compact has a crisp screen with pixels to spare, making apps, games, webpages and phone snaps look bright, punchy and easy-on-the-eye.

The phone also allows you to turn up the saturation and contrast with the X-Reality setting, which uses Sony’s Bravia TV technology to tweak photos and movies.

The biggest benefit here is the Z1 Compact's viewing angles: with an IPS (in-plane switching) display – unlike the Sony Xperia Z and Z1 – and you can happily tilt the Compact's screen in landscape, while keeping the vibrancy of onscreen colours.

A 4.3in screen is just about big enough to watch movies on and, although the larger Z1 offers a slightly more detailed picture, the Compact comes into its own with better contrast and more vivid colours.

Watch Alfonso Cuarón's Gravity – yes, on a smartphone! – and the Z1 Compact's picture throws up the deep blacks of space with a wide, natural colour palette.

When the Z1 Compact is compared with the similarly-priced iPhone 5s, the Sony screen is a bigger and better picture.

Streaming The Short Game via Netflix still favours the iPhone. Perhaps this is more of an optimisation issue, but head-to-head on local files, the Sony is our pick.

What impressed us even more is the superb sound quality of the Z1 Compact – Sony is right when it says 'better not bigger'.

Play Pharrell Williams' G I R L with a decent set of headphones (we’d recommend the AKG K451 at £50, or the Philips M1s priced at £160 if your budget extends that far) and the sound is clean and precise.

The sound has plenty of dynamism too – as we hear on the loud crowd whistles at the beginning of a live-version Jónsi’s Grow Till Tall.

Bass-heavy tracks like Daft Punk’s Derezzed show the Z1 Compact has the best sound quality of any Android we’ve tried this far and if you want a phone to be your main music playback device, then this model is an excellent choice.

Sound from the single-speaker grille on the bottom of the device (the micro-USB is on the side) is decent too, though it cannot match the BoomSound speakers found on the HTC One.

The Z1 Compact runs smoothly with Android, which hasn’t always been the case, and running Jelly Bean, Sony has added apps and services only when needed.

Walkman is the stylish and useful music player, while movies show up in the integrated Movies Unlimited app.

There is also an excellent selection of downloadable titles in SD and HD and access to the Google Play Store.

A feature unique to the Sony Xperia range is its waterproofing and dustproofing capability.

The Z1 Compact can supposedly be submerged in one-metre of water for up to half-an-hour, as long as the phone’s flaps are sealed.

This might not be a deal-breaker for anyone thinking of buying it, but it’s nice to know that a mishap involving water should not mean the end of your phone.

The Z1 Compact battery is smaller than its bigger sibling’s (2300mAh compared to 3000mAh), but thankfully doesn't mean the Compact is going to run out on a long journey or commute home.

Video playback can reach nine to 10 hours, depending on your brightness and audio settings, or if you have the Compact on its regular settings, then it should last all day.

The Compact Z1 runs on the same Qualcomm processor as the Xperia Z1 and it shows. There's no slowdown anywhere: from downloading HD movies, playing Android games, or using Sony's interface.

The Compact Z1 is slick and impressive for usability and shows just what smaller Android phones can do.

It also supports 4G, making it futureproof, and has NFC (near-field communication), which is handy for pairing headphones, speakers and other accessories.

With only 16GB of storage onboard, it nearly goes without saying that you will be using the microSD storage to upgrade to 64GB.

Sony's best smartphone camera (at 20.7-megapixels) is another surprising addition to a handset this size.

The Z1 Compact has an an easy-to-use camera app, smooth HD video skills and plenty of settings and effects to play with, but it is still outclassed by the iPhone 5s and, at times, the Galaxy S4 Mini.

Although the camera is nicely balanced and detailed with excellent macro skills, images can lack punch and its low-light abilities don't match the best out there.

Overall though, it is a reliable smartphone camera.

The Sony Z1 Compact is proof that good things can come in small packages and if you like a smartphone that’s easy on the hand, then this is a good choice.