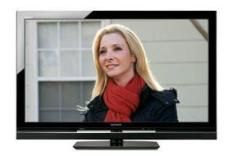 This TV excels in many areas but it's also plagued by an uneven backlight. Another five-star rating slips through Sony's fingers

If you've been to your local Sony Centre or John Lewis lately, you might have caught a glimpse of the KDL-40W5710 LCD TV.

This isn't a new Sony set launched on the quiet; it's actually a different version of the KDL-40W5500, that's being sold exclusively through these two chains.

Specification for the '40W5710 is identical to the '40W5500's. This means the TV is equipped with four HDMI inputs, Full HD resolution and 100Hz Motionflow picture processing.

The only physical difference between the two TVs is – wait for it – the '40W5710 has a different-coloured speaker grille.

The backlight bleeds into the corners – you can see this on the black bars during a movie and in dark scenes in TV programmes.

It's a shame, because other than this, the Sony produces a picture that's tough to fault.

1080p/24fps Blu-ray images are blessed with sensational levels of detail. Watching Australia, the Sony copes well with the frenzied movement of the cattle stampede, while the colour balance is expertly judged.

The TV proves to be an accomplished upscaler of standard definition content too, while Freeview performance is up there with the best-in-class.

If the backlight wasn't such an issue you'd be looking at a five-star set. But this isn't the first time we've had to dock a star from a Sony TV because of this problem.

See all our Sony TV reviews