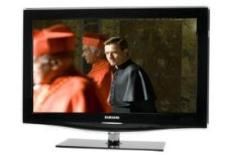 There's much to admire here, but the Samsung is feeling the squeeze from all directions

The Samsung has come down a useful £50 since we first tested it back in May 2009. It's also come down a star... which leaves us with some explaining to do.

But before we get into any star-rating-related recriminations, let's just have another run through all the things that make the LE32B650 such a worthwhile device.

For a start, there are the looks. Samsung tries hard with the design of its screens, and the curvy, 'platinum black' chassis, clear pedestal upright and general air of thoughtful style make it one of the more desirable lookers in its class.

Great specs and looks
It's got the specification to back the looks up, too: 1920 x 1080 resolution, wireless DNLA networking, USB 2.0 input, 100Hz motion processing and four HDMI inputs.

It's a decent TV, too. Motion is seldom ruffled, the colour balance is pleasingly neutral and there's plenty of detail on show. There's a hint of coarseness to edge definition and a suggestion of shimmer to more complex, pattern-heavy scenes, but on the whole it's very agreeable.

Watch our vidcast about this TV

Similarly, upscaled DVDs look good. Some other sets may deliver more in the way of fine detail, and there's a slight lack of subtlety about the way the Samsung describes skin-tones, but where motion, black levels and contrasts are concerned, the LE32B650 has little to worry about.

Good with high definition
Step up to a Blu-ray of Blade Runner (a tremendous remastering job, by the way – well worth revisiting in high-definition) and dark-shade detail present in the murky Dystopia is profoundly impressive.

Edges are crisp, colours either vibrant or exhausted, and movement is followed without alarms. The Samsung even sounds passably balanced, even if there's no meaningful weight to the sound.

The problem, as it so often is, is other products. Since we last looked at the Samsung, the excellent Philips 32PFL7404 has arrived – and it's demonstrably a better product.

More significantly, LG's impressive 32LH5000 has shown up in the meantime, and it offers almost everything the Samsung does for less money. So four stars is virtually a fait accompli.