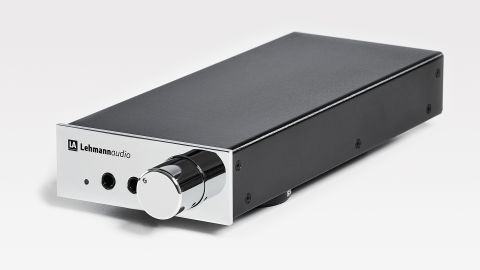 The Lehmann Linear USB II DAC/headphone amp is a balanced and capable product, and it could form the heart of a terrific system

We can’t believe it’s been a decade since we last got our hands on a Lehmann product. Back then we reviewed three in quick succession; two sub-£500 phono stages – the Rhinelander and Black Cube – and the original Linear headphone amplifier at £750. All received glowing five-star reviews, and remain in production today in pretty much unchanged form, with relatively modest price increases.

Lehmann isn’t a company that changes things unnecessarily, so when it introduces a new product it tends to be big news. The Linear II doesn’t replace the original, but is intended to offer a step-up option for those who want an even better performance. But there’s a downside – the price goes up significantly.

The new model shares the same basic design as the original, but uses a fully revised analogue board packed with premium components such as low-loss MKP precision capacitors and a discrete Class A output stage. Great care is taken with the power supply to ensure that the Linear can drive any conventional dynamic headphones with ease.

We use a range of cans, including Focal’s Stellias, the T1s by Beyerdynamic and Grado’s classic RS1s without issue. Lehmann has thoughtfully provided a choice of gain options – 0dB, 10dB and 20dB – to help with headphone matching. These gain choices are set by dipswitches on the unit’s underside.

There are two versions of the Linear II; one with coax and optical digital inputs and one with USB, which is the one we’re testing. The price is the same regardless of digital option chosen.

It’s the inclusion of an analogue input that sets this product apart from most rivals. It means that the Lehmann will work in a mixed digital/analogue environment, whereas rivals such as the Chord Hugo 2 won’t. Switching between the two inputs is automatic when a signal is detected, with digital having priority.

Outputs are a choice between the pair of front panel 6.3mm headphone jacks – you can use both at once – and single-ended stereo RCAs for use into your main system. Using the left headphone output mutes the RCA outs, which is handy if you’re using the Lehmann as the system preamp. It would have been nice for the company to include a remote to make things more convenient in such a context.

Build quality is as good as we’ve come to expect from the brand. The product feels solid and is finished with care. Such is the attention to detail that even its feet are carefully chosen – they decouple the unit from its support and so help performance. The Linear comes with a choice of three finishes: black, silver or a chrome faceplate version for a £100 premium.

This is such a simple product to use. The auto input switching leaves the front panel controls limited to the volume control. We like the clean and simple appearance, but would prefer some sort of display to show the bit depth and sampling rate of the incoming signal.

The Lehmann’s sheer simplicity makes it a pleasure to use – it’s fuss free and sounds good too. We hear the even-handed balance and precision we remember from the earlier products, but here it’s partnered with the kind of resolution and insight the price point demands.

We try the USB input first, using our resident MacBook as the source. This laptop runs Audirvana Plus media playing software and is packed with CD quality and hi-res files. The Lehmann delivers a detailed and nicely organised sound, but it isn’t an attention-grabbing presentation, because that’s not the company’s way.

The Linear offers a more measured approach to music replay, putting long-term satisfaction ahead of short-term thrills. It’s a sound that has us appreciating the dynamic ebb and flow of Arvo Part’s Tabula Rasa, the beautifully crafted interplay between the musicians and the slowly building momentum of the piece.

We also note the well-balanced tonality that treads carefully between delivering a good amount of bite to the strings without sacrificing refinement. There’s enough resolving power in this product to highlight a poor recording (or a sub-standard source component for that matter), but it never makes a meal of things.

We play Neneh Cherry’s Blank Project set and the Lehmann responds with a good amount of attack and a surefooted handling of rhythms. Cherry’s vocals come through with passion and the Linear does a good job of rendering the texture and nuances in her voice.

The album’s basslines are delivered with grip and punch, giving a firm foundation for the rest of the sound to build from. This is a likeable and entertaining sound, which has us focusing more on the music than the task of reviewing, which can only be a good sign.

We compare the analogue and USB inputs and prefer the former. While there’s not a significant difference in sonic character, there’s no doubt it’s a more articulate and expressive performance through analogue.

While the Chord Hugo 2 is a digital-only product, and weighs in at a pricier £1,799, it delivers more in the way of dynamic contrasts and renders rhythmic drive with greater purpose. The Hugo uncovers an extra level of fine detail too.

But that’s not to say the Lehmann doesn’t have a place. It’s a more flexible unit than the Chord and nicer to use. Its sound, particularly through the analogue input, is hugely capable. The Lehmann Linear USB II simply gets out of the way of the music and that’s the most important talent of all.