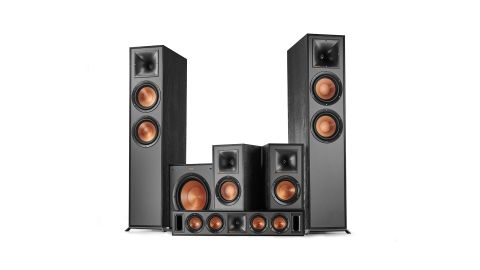 A lot of speaker package for the money, but this Klipsch system never really threatens the class-leaders.

There are few trends we don’t see coming, but we didn’t quite comprehend 12 months ago just how strong a year this would be for home cinema packages.

We also dished out two extra Awards in our speaker packages category – one at either end of last year’s price points – and rarely have winners had to fight so tooth and nail to come away with those richly deserved trophies.

The flip side of that, of course, is that these are decidedly perilous waters in which to release a new product. One wrong move could see you devoured by your competition, as Klipsch has found out with its Reference Base 2018 Home Cinema Package.

That’s quite a mouthful, but you certainly get a lot of speaker for the money. Right and left front channels are made up of Klipsch’s R-620F floorstanders, which pack a lot of technology into their towering MDF cabinets.

A Tactrix port can be also found on the rear of the cabinet, supporting the R-620Fs’ pair of 16.5cm Injection Moulded Graphite mid/bass drivers with extra low-frequency output. The driver cones catch the eye with their spun copper colour set against the black cabinet.

We tested this Klipsch suite as a traditional 5.1 system, but there is also the option of adding the company’s R-41SA Dolby Atmos Elevation Surround Speakers (£349), which sits on top of your front channels on rubber feet.

Surround channels in this package are occupied by the R-51M bookshelf speakers, which resemble their floorstanding teammates. Built using the same technology, the main difference is their smaller cabinet, which makes room for only one, smaller 13cm version of the Klipsch IMG mid/bass driver.

The centre is the most important speaker in any home cinema package, and Klipsch has opted for four 9cm versions of its IMG driver, straddling another one of those horn-aided LTS tweeters, and sandwiching the whole array between a pair of front-firing Tactrix reflex ports.

The idea behind overloading the centre with a quartet of smaller drivers is to create a diminutive, sausage-like speaker that can easily be accommodated beneath a TV, with the front-firing ports allowing the listener to place it closer to a back wall.

Lastly, there is the R100SW subwoofer, which drives its own 25cm spun-copper IMG driver with an all-digital amplifier outputting 300W peak power. Despite keeping Klipsch’s eye-catching black-and-copper design, this isn’t the most dominating of subs, but it fits in with the company’s aim of creating a floorstanding package that won’t necessarily take over a room.

Having given the Reference Base package a couple of nights’ running in, we settle in to listen to a performance that is as bold and idiosyncratic as its aesthetic principle.

Klipsch is not a manufacturer to shy away from power, and even at lower volumes this package paints the walls of our test room with bold, confident brushstrokes. Despite the rear channels being made up of relatively small standmount speakers, the R-51Ms appear self-assured enough to emit a warm, solid performance akin to that of the R-620F towers, but without overstretching themselves.

Detail levels are respectable, with both dialogue and soundtracks decently textured and offered a fair deal of space in which to dance.

But while Klipsch’s two pairs of stereo speakers are competent, a few moments of music playback highlights some questionable timing and a somewhat muted dynamic reach. It doesn’t stick out unduly during a film, however, our main gripes concern those units built specifically for the purpose of cinema.

The R-100SW sub and R-34C centre appear sonically detached, as if reading from different hymn sheets. With the former, it feels like those rumbling low frequencies are being puffed out rather than punched. It’s a woolly presentation that makes it seem as though there is a gap in the frequencies that the sub and floorstanders are capable of. Longer listening highlights more of a conflicting presentation that makes the R-100SW stick out.

But even more disappointing is the performance of the R-34C centre. This speaker plays the most significant and pivotal role in a home cinema package, handling some 90 per cent of dialogue, yet Klipsch appears to have made some pretty severe miscalculations.

For a start, there is a brightness to the treble, ranging from irritating to piercing, that makes the whole package difficult to listen to at anything like high volumes. Those Tractix ports appear to be doing little to bulk up the mid-range offered by the R-34C’s quartet of drivers.

There would perhaps be some wiggle room for tempering this brightness with some careful system matching, were the performance worth it elsewhere. But sadly, it isn’t. This package might have stood little chance of beating Q Acoustics’s 3050i Cinema Pack for entertainment or enthusiasm anyway, but the centre speaker shows little interest in putting up a fight.

Giving the Klipsch Reference Base 2018 Home Cinema Package a star rating isn’t a straightforward task. In many ways, this is a respectable if not sparkling system. Although it has been let down by two of its components, it could still make the basis of a decent Frankenstein-esque 5.1 package.

Sadly, though, in a year in which we’ve been treated to several sterling speaker packages, it seems a bit of a shame to end it with one that is off the pace.