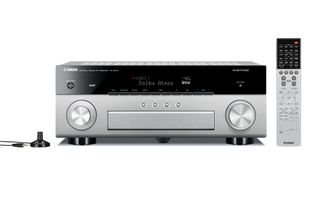 In some circles there remains a belief that, while AV receivers are great for immersing you in the action of a big blockbuster movie, they aren’t that good for playing music.

Those considering themselves ‘serious audiophiles’ can get a bit sneery, pointing out that all the extra stuff built into a product designed for surround sound – processing, extra amplifier channels and so on – fly in the face of the purist ‘straight wire with gain’ ideal for a hi-fi amplifier.

Yamaha begs to differ. Its AV receivers and amplifiers have always been built with music as well as soundtracks in mind. The DSP modes built in to maximise the enjoyment of music have long been based on measurements taken in real concert halls and venues around the world, and designed to put you at the centre of the musical experience.

And now, Yamaha’s AV receivers have become the heart of the home entertainment system, playing back music every bit as well as they deliver action movie thrills or a subtly atmospheric soundtrack. They’re built to provide exceptional entertainment, no matter what sort of entertainment you’re after.

Your hub for total home entertainment

As you’d expect, Yamaha AV receivers can fulfil your home cinema needs, be they basic 5.1 or bleeding-edge Dolby Atmos. But they can also play music from just about any source – your computer or NAS, Bluetooth, AirPlay, CD, vinyl, you name it – and often at better-than-CD-quality. Additionally, they can access popular streaming services such as Spotify, Deezer, Qobuz and Tidal.

But they go further than that. Higher-end models’ extensive multi-zone outputs can be used to distribute this video and audio entertainment to multiple rooms via cabled HDMI and speaker connections. And now, thanks to the integration of Yamaha’s MusicCast wireless multi-room audio system, almost all Yamaha AV receivers can also distribute music to places the cables don’t reach.

Related: Yamaha: Ahead of the curve for 130 years

Using MusicCast, you can stream your music to your choice of dozens of Yamaha MusicCast products – from wireless speakers to amplifiers to mini systems – all under simple app control on a smartphone or tablet. You can play the same music in every room, or each room can play something different, whether it’s your own music, Internet-streamed services or one of tens of thousands of Internet radio stations from around the world.

Yamaha MusicCast can deliver your music just where you want it, and even do so with hands-free voice control, thanks to the integration of Amazon’s Alexa technology. Say what you want to hear, and it plays – it’s that simple.

A system for everyone

Starting with compact, 5.1-channel solutions, all the way up to four-zone,11.2-channel powerhouses that will give the local multiplex a run for its money, there’s a Yamaha AV receiver for every need and budget.

The new RX-A670 7.2-channel receiver features Dolby Atmos and DTS:X immersive sound for movie soundtracks, and it’s ready to pass the latest 60fps 4K video formats to your screens and projectors, with support for Hybrid Log Gamma and Dolby Vision variants of HDR. On top of that, it will play music of qualities all the way up to 192KHz/24-bit and DSD5.6 for super-high-resolution audio – and, of course, it features MusicCast.

Long before there was home cinema, Yamaha was making its legendary Natural Sound hi-fi components, and indeed lays claim to being the first company to coin the term ‘high fidelity’. In other words, put a Yamaha AV product at the heart of your system, and you don’t just get a home cinema; you open up a whole world of fabulous entertainment.

To find out more about Yamaha’s range of AV receivers, click here