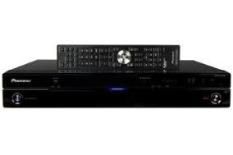 We seem to have had a little run on DVD/HDD recorders, and here's a premium entry from Pioneer.

The DVR-LX61D sells itself as an ‘advanced media centre', doubling as a storage device for music, photos and video, in an effort to justify the relatively large £450 price tag.

It's no idle boast. The 'LX61D is capable of recording content to its hard-disk drive straight from a CD, DVD, camcorder or PC, all via the Ethernet or USB connection.

The cherry on the cake where music is concerned is the Gracenote database, allowing the Pioneer to access all the relevant track information.

You can pause live TV
Inside the shell sits an analogue and digital tuner alongside a 250GB HDD. The ability to pause live TV is here and disc compatibility is impressive, supporting DVD-RAM, DVD+-R/RW and dual layer discs.

Also of note is the HDMI 1.3a connection, via which you can send upscaled 1080p video content.

The 'LX61D's interface is intuitive, making the unit easy to navigate. However, we're far from blown away by the Freeview tuner.

The most pressing problem is the digital noise – the 'LX61D lacks the cleanliness of image exhibited by cheaper DVD/HDD recorders, while also lacking that extra level of insight.

Playback problems
The recordings in the top modes are faithful and you've plenty of room to store content, but naturally your picture will only ever be as good as the tuner's performance.

It's a similar story with DVD playback, with digital noise again surfacing. As for music, although storing it proves easy, recordings lack refinement, weight and simple musicality.

This Pioneer promises much, but while its functions impress, the basic level of performance just isn't good enough to justify the price tag