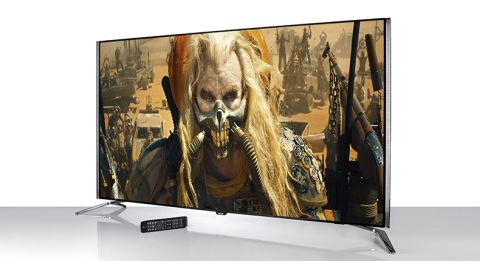 As an overall package, the Philips 65PUS8601 offers something quite different; in terms of picture quality, it is only a few steps short of five stars

It is the clearest compromise of modern television, but is it possible to create a set svelte enough to contend with the market’s current chic, without forfeiting a decent sound?

With its 8601 range, Philips believes itself to be in possession of the answer.

Effectively, that answer is magnetic, augmentable sound strips with a collective 16 microdrivers, which attach to become the ears of the television, firing sound straight at you.

Or, combined with Philips’s £350 wireless detachable speaker bases, they can be positioned anywhere within the room to suit the spread of sound you prefer.

Aided by two neodymium subwoofers built in to the back of the set, they are capable of accommodating a claimed 50W of power.

This isn’t the first time a company has attempted to combat our televisions’ deteriorating sound quality, of course, but we don’t recall it being done so elegantly or intuitively; and, personally, we like the way it looks too.

Without dwelling too long on peripherals and external effects, it is also worth mentioning the 8601 range’s Ambilight feature. It is essentially four rows of glowing lights, framing the back of the set and modifiable via settings, which project upon the wall behind your telly.

“Your screen seems much wider, your experience more enhanced … and your TV appears to float on air,” claims Philips; we will at least agree it is a soothing and gentle touch, which we choose to leave on, once having tested with and without.

As for what’s happening on the screen, you’re getting a 4K set with Philips Perfect Pixel Ultra HD and BrightPro technology, the crux of which is to boost contrast up to two times more than normal LED backlight, without sacrificing the subtleties or authenticity lying in between the darkest darks and brightest lights.

What’s more, Philips has promised an update in the second quarter of 2016, which will upgrade the set to be HDR compatible.

We stop to admire the 65PUS8601’s remote control, on the reverse of which is a QWERTY keyboard. Given the amount of password typing and YouTube searching you do on a smart TV – despite the fact many come with phone and tablet apps – we think this should be a new standard.

But more than that, it’s the heaviest remote we’ve held in donkey’s years; forget motion sensors and magic wands, this is a remote control that feels befitting of the two-and-a-half grand you’ve just spent.

See all our 4K TVs reviews

Having breezed through the opening menus, the first thing to do is of course calibrate the picture using our THX disc. This is where we bump into a familiar Philips gremlin, those counterintuitive settings menus.

Our first job is finding the correct parameter – we’ve reviewed enough Philips televisions to remember where most of them are hiding, but this can be a laborious grind when you’re left to orienteer without a map – and then to work as well as you can with the little, if at all noticeable, wiggle room you are afforded.

We don’t advocate seismic shifts each time you nudge contrast up a notch either, but the miserly offerings here are often barely worth the effort it took to scout the menu.

But this is a familiar problem with Philips TVs, and almost in spite of this, we receive a quality picture. We switch the disc over to a Blu-ray of Gravity.

Despite being just a film about Hollywood actors floating in space, it is visually spectacular and deserves a gifted platform, which the 65PUS8601 is more than capable of providing.

There’s plenty of detail and its talented contrast is shown off nicely by the black sky, and, with a little boost from the motion enhancement setting, there is no trouble when, every once in a while, something does kick off.

That BrightPro does appear to be working, with a vibrant colour pallet that, although it doesn’t appear to reach to as deep a black as the Samsung UE65JU7000, doesn’t over-egg the pudding; skin tones and hair are believably natural.

Sitting it next to one of its closest rivals, the Samsung UE65JU7000, we do miss some of those subtleties of colour and shading that help with perspective – the distance between foreground and the earth in the distance – and detail within skin and hair.

The same difference is true when searching for detail within the darkest shades; the Samsung sets itself apart in these respects, though it doesn’t at all devastate our enjoyment of the Philips.

Overall it is an impressive picture, which is noticeably improved when we switch to streaming Daredevil from Netflix in 4K.

Whereas most sets make some kind of leap, we get the feeling with the 65PUS8601 that we’re experiencing a greater amount of the improvement Ultra HD is able to make on quality of Blu-ray.

Take it down to standard definition broadcast, however, and the Philips proves itself to be a dab hand at upscaling as well; there was a time not long ago when standard definition TV channels were almost unwatchable on a 4K screen, especially of this size, but we’re suitably impressed with what the 65PUS8601 does here.

MORE: The first 4K Ultra HD Blu-ray discs are on sale in the UK

Finally, browsing BBC iPlayer’s music category, we pick out its Perfect Pianists documentary to get a real handle on those detachable speakers. We aren’t surprised at the difference having sound focused toward us makes, even with television speakers, but even so we are impressed.

Without the additional bases, the sound is initially a little trebly for our liking, not really giving the piano or spoken words any real body, but thankfully the sound settings are more tactile than those for the picture, and we are soon able to find a nice balance.

It isn’t the most expressive sound we’ve heard from a television, but has a directness and strength you just won’t get from downward or backfiring speakers.

As for the sound bases, could you find a soundbar that’d set you back less and offer a better sound? We believe so, yes.

But that’s also a little beside the point; what you get here is a greater spread of stereo sound, the kind you could only get with a pair of speakers or otherwise a surround package, and in an undeniably sleek shell.

It’s not quite a no-brainer, but it offers many solutions a similarly-priced soundbar simply couldn’t.

Philips has put together a mightily attractive package for your £2500, with an outstanding picture and intuitive sound system.

It falls just shy of its class-leading rival in terms of colour subtlety and black detail, and ease of use is still an issue, but we’d still happily have one of these in our homes.