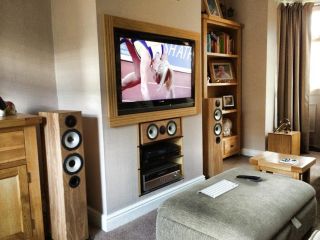 Yet again, we were hugely impressed with all of the #WHFsystems submitted via the What Hi-Fi? Twitter and Facebook pages during June. After selecting 10 of the most popular, we again asked you to choose your favourite... and the results are in.

– Talk us through your system...

Oh, and the Logitech Harmony Touch that controls it all.

– How have you built your system?

Most of the equipment is a few years old now. The most recent addition is the Monitor Audio speaker, which we purchased in March to finish of a living room refurbishment. It's all centralised around an old fireplace, which has been boxed out. All the wiring is hidden as much as possible, behind coving and brush sockets either side of the fireplace.

– What's next? Are there any upgrades planned?

I'm very happy with the system as it is. But we have been eyeing up a turntable up to the £400 mark – a Project or a Rega. And, if they release a nice 4K 42" OLED sometime in the future, that would be sweet.

Thanks to Lee for sharing more about his system! And be sure to watch this space for the best of July's #WHFsystems. You can also submit a picture of your system to us via either our Twitter and Facebook pages using the #WHFsystems hashtag.