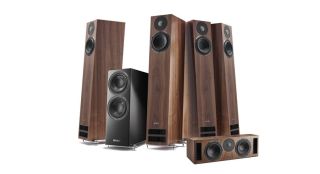 New speaker packages don’t arrive every week. Fortunately, great performers don't have a short lifespan, which is why there are a few familiar faces among the 2019 What Hi-Fi? Award winners of the home cinema speaker packages category.

Certainly at the upper end of the market, it’s very much as you were. That’s why the glorious PMC Twenty5.23 5.1 package, which is very much at the core of our home cinema room's reference set-up, remains our top choice if budget is no option. For the second year in a row, it's taken the award for being fun and punchy yet still incredibly serious about how they take on the subtleties of any soundtrack.

Likewise, there have been no worthy challengers at the £2,000-£5,000 price point in the last twelve months, which means that it’s three on the trot for the balanced and expressive Monitor Audio Silver 200 AV12.

Instead it's the £1,000-£2000 zone where manufacturers have breathed new life into the market this year. We’ve had two new five-star additions to the What Hi-Fi? archives of late.

Some money could very wisely be spent on the Elac Debut 2.0 5.1 Home Theatre System, but it’s the divine Dali Oberon 5 5.1 package that has emerged victorious in our Awards. It’s great to see the industry producing a set of speakers looking almost as good as they sound. Indeed, they’re enough to encourage even the most ardent of home cinema-refusers to think twice about letting 5.1 into their living rooms.

Q Acoustics has addressed the issue of adding more weight to its 2018 Award-winning packages with an all-new QB12 subwoofer. It’s very, very good and well worth adding to your current Q Acoustic system if you already have a set. All the same, if buying from scratch, we still feel like the Q Acoustics 3010i and Q Acoustics 3050i bundles are the place to begin. Both retain their titles for a second season.

Then, in the less than £500 bracket, what could possibly replace the Wharfedale DX-2 system, which comes in at just £399? No one, that’s who. Better luck next year, competition.

Well, that's everything wrapped up then, except for one thing: which of these home cinema beauties will be our 2019 Product of the Year. You'll have to wait for us to spill the beans at our Awards ceremony on Tuesday 5th November 2019 to find out.

A trio of home cinema amplifiers pick up 2019 What Hi-Fi? Awards