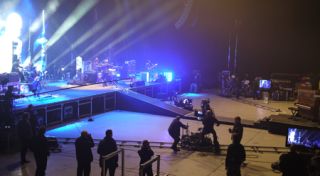 If you're lucky enough to have a 3D TV and Sky 3D subscription, you can catch Elbow in 3D on Sky TV this Sunday. Our very own Tom Parsons has just had a sneak preview, and reckons it's a "must-see".

The BRIT and Mercury Award winners were filmed in 3D during their rehearsals for the band's recent Build a Rocket Boys! tour.

Sky teamed up with Panasonic to film the 75-minute programme, which features interviews with the band discussing the making of Build a Rocket Boys! in addition to performances of Lippy Kids, Neat Little Rows, The Night Will Always Win and Open Arms.

You'll also be able to see the band play classic tracks including One Day Like This, Puncture Repair and Grounds for Divorce.

Elbow Live in 3D will be shown on Sky's 3D channel this Sunday, June 12th, at 8pm. It will also be broadcast in 2D on Sky Atlantic at the same time.