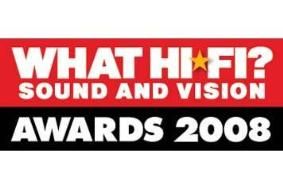 You can nominate any piece of hardware, software that's tested your system to the max (including Blu-ray discs, CDs, DVDs and games), or a particular technology that's impressed you.

Just add your choice (only one per person) by posting a reply to this thread on our Forums, and then at the end of August we'll launch a dedicated Awards 2008 microsite where you'll be able to vote again for one of the shortlisted items.

The winner will be announced at the What Hi-Fi? Sound and Vision Awards ceremony at The Dorchester hotel in Park Lane, London on the night of September 24th.

What's more, we'll be giving away two tickets to the prestigious Awards ceremony on the night of September 24th. Anyone who votes for the winning product will have their name put in the hat, and one lucky winner will be allocated the two free tickets for a night to remember!

So get voting now, post your nomination here and have your say in the 2008 What Hi-Fi? Sound and Vision Awards.