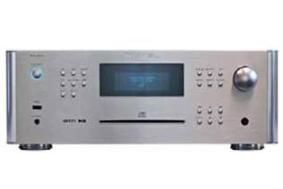 POSTED 23.09.10
It's time for the custom-installation-fest that is the annual CEDIA Expo, and at the show in Atlanta Rotel has announced that it's now shipping two networked music products into US shops.

One is what it's describing as 'a tuner for the 21st century', the RDG-1520 having both FM and internet radio capability, the ability to stream music from a network, and USB connectivity for direct digital hook-up of an iPod or other suitable memory devices.

The other is an integrated internet/FM receiver/CD player with UPnP streaming capability, the RCX-1500, which Rotel is saying is 'the most versatile component we've ever made.'

Selling for $999 in the States, the RDG-1520 – RDG standing for 'Rotel Digital Gateway' – uses Wolfson 24-bit/192kHz digital-to-analogue conversion and a 'high-end analogue stage'.

As well as terrestrial and internet radio stations, it can access premium streaming services, and offers 30 presets for fast access to favourite stations.

Both this unit and the RCX-1500 support UPnP technology and have been 'optimised for use with Windows Media Player 11 and 12.'

Both units also have RS232 connectivity for system control and bi-directional feedback, for use in custom installations.

The RCX-1500 itself uses the same digital-to-analogue conversion technology as the tuner, along with Class D amplification delivering 100W per channel. The CD section, meanwhile, is based on the company's RCD-1520.

Rotel says of the $1499 unit that it's 'without doubt, one of the most flexible, high performance, single chassis stereo components available today. It may be the only stereo component you will ever need.'