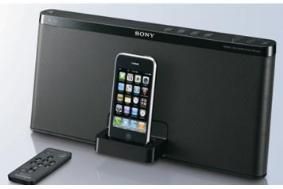 The latest range of iPod docks from Sony has a new arrival, the RDP-X50iP. Yours for £180, it's tuned for the UK market in line with the rest of the Sony models.

Low on frills, the new dock will work with iPods and iPhones, playing your music and charging your portable as it does so.

It doesn't look to boast the OLED display of the more expensive model but it does come with a remote control and still looks rather natty.

Design-wise the CMT-FX350i is similar to the 'FX250 but includes an integrated iPod dock, while the more powerful CMT-BX77DBi pumps out a claimed 50W through its larger speakers.

And the flagship CMT-MX550i has a "contemporary design" to match Sony's new range of Bravia Monolithic TVs. It's fitted with a S-Master digital amplifier, delivers 60W RMS output and has been tuned by Sony's UK sound engineers.

It also has USB playback for MP3 tracks from a memory stick or other digital media devices, CD player support for CD, CD-R and CD-RW discs and a DAB radio.

Also new from Sony are the RDP-X80iP (£200) and RDH-SK8iP iPod docks. The former offers up to seven hours playback from its rechargeable battery, while the latter comes with a selection of graphic skins so you can personalise the look of it. Additional skins are available from www.sony.co.uk/skins.