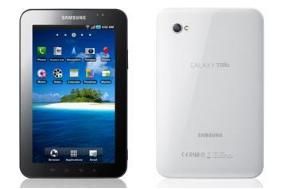 Available online from Amazon and Carphone Warehouse, Vodafone has also announced pricing, with Currys waiting in the wings.

And the price war has started already, with Amazon seemingly beating its own launch price – of £668 – by offering the 16GB machine from a third-party, Prepaymania, for £530.

Vodafone has announced its payment plans, with prices starting from £3 per month for 30 days 'occasional data usage', and a price of £499 on the Galaxy Tab unit itself.

Samsung hopes its Android-powered, Flash-browsing, 7in-screen sporting tablet will be take the fight to Apple's iPad, as Android steps up its attack on Apple and the iOS software.

It seems the initial price listing of Samsung's Galaxy Tab may merely have been a flag in the sand, as Amazon has once again dropped the listed price.

The release date is now set at November 1st – later than we initially thought it might be – and is now available for preorder for £600.

Sharp intakes of breath were audible when the first mutterings of the price were heard, but it looks as if slowly but surely the Galaxy Tab's price tag is falling into line with the iPad.

The Samsung Galaxy Tab, launched to much fanfare at IFA 2010 earlier this month, has appeared on sale for £799 – and that's for the 16GB model.

The tablet has appeared on the Amazon UK web site, and while Amazon has already knocked a few quid off its price, it lists the retail price as £799.

With a 32GB model set to be released as well, we can only assume it will cost a fair more on top of that.

We can only assume the Samsung Galaxy Tab will largely sell through service providers as part of a contract bundle, and therefore at a reduced price.

Read our full story of the Samsung launch below.

We're hoping to get our first glimpse of Samsung's iPad rival, the Galaxy Tab, at this morning's press conference, which starts at 10am UK time.

The queue is already forming outside the Samsung stand, so we'll bring you regular updates throughout the press conference. Expect more news on the Korean firm's plans for 3D TV and Blu-ray too.

• And we're off. Samsung will launch a family of products to create a 'smart life'. It's predicting sales of two million 3D TVs worldwide by the end of 2010.

• Main focus is on software and convergence to get most from hardware. Smart TV = Samsung apps.

• Samsung claims it is now the world's biggest consumer electronics company and No.1 in TV sales worldwide.

• Apparently nine out of ten 3D TVs sold in Europe to date were Samsung models. Next week the company will demonstrate the first Samsung Full HD, 3D TV broadcast in Holland.

• 'Smart TV' is key for Samsung. So internet TVs with unrivalled content is the aim: Internet@TV.

• Samsung Apps Contest launched in UK and Europe, to open up the Internet@TV platform to developers. It's a 500,000 Euro challenge for developers to create apps for Samsung TVs. Winner will be announced in February 2011. Clearly pushing online TV content is the objective here.

• Most of the new products look familiar, as we've probably seen them at CES back in January. They're now showing off the flagship C9000 Series TV, Been there, seen it, reviewed it already! Next.

• Last but not least is the eagerly Galaxy Tab, Samsung's entry in the tablet market.

•• Galaxy Tab has Media Hub and Music Hub download stores. HD support and MicroSD memory expansion. Plus 3 megapixel cmera with LED flash for stills and video. Also crams in DLNA support and Samsung's AllShare, and thanks to Android 2.2 it supports Flash.Take that iPad!